Live From Las Vegas Barrett-Jackson Will Auction 7 Celebrity Car Collections And Over 600 Vehicles On June 17-19, 2021 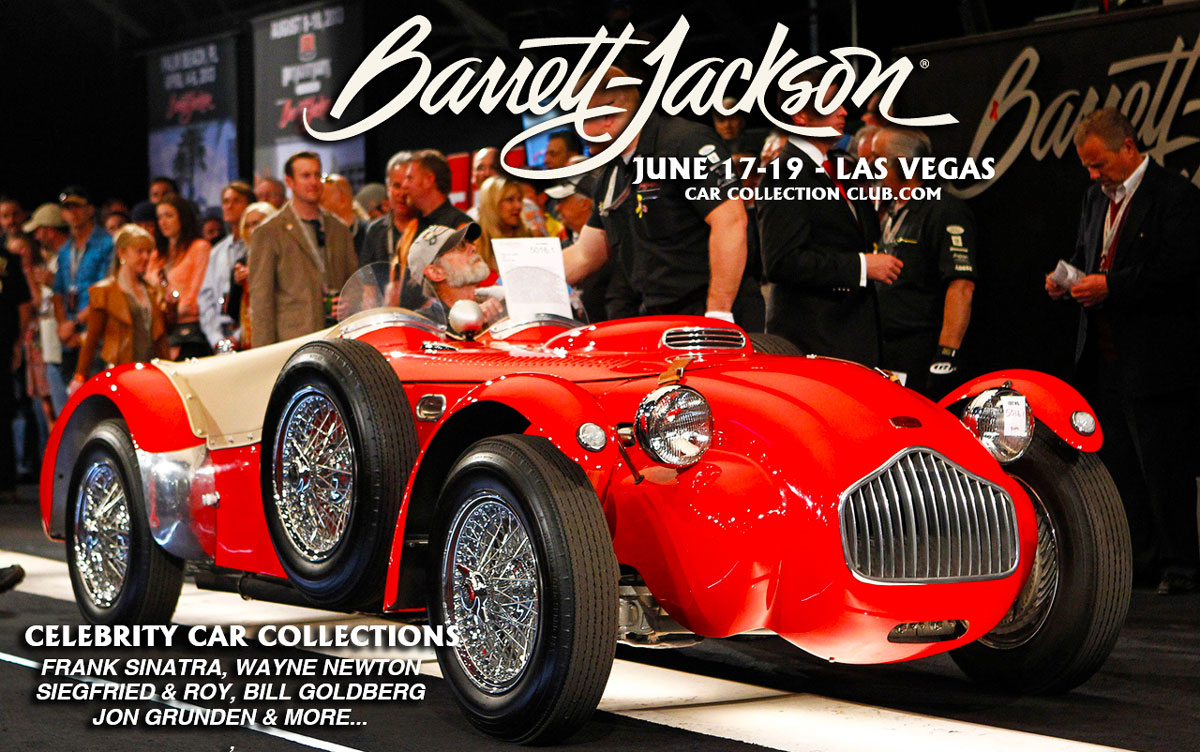 Barrett-Jackson will be auctioning over (600) pristine vintage collectible cars along with a host of world-famous celebrity cars LIVE from Las Vegas on June 17th thru June 19th, 2021.

The celebrity cars to be auctioned are from top notable Las Vegas entertainers and movie stars such as Frank Sinatra, Wayne Newton, Siegfried & Roy, Bill Goldberg, and Jon Grunden. Some additional luxury vehicles for Kevin Hart and Deadmau5 will also find their way in front of the auctioneer.

With car collection becoming more popular than golf, and with a sold-out consignment docket, The Barrett-Jackson Vegas Auction will have 100% NO RESERVE…

In addition to the millions watching the events via live television coverage on FYI and HISTORY, over 500,000 people are in attendance at all three auctions in Las Vegas

There will also be an Auction For Charity under Barrett-Jackson’s Charity Auction Docket. 100%  of the sales are commission-free and will be donated to the foundation. Cars selling at the Charity include:

The first day of the auction is scheduled for Thursday, June 17, 2021, and will continue for three days. Events include Displays from Sponsors, Exhibits, Marketplace from eBay Motors, Automobilia Auctions, Car Auctions, and fantasy bidding. Each day will offer Streaming Video over the internet and TV and Cable Broadcasts.

Day one starts with doors open at 8:00 AM for Sponsors on Display and General Admission. Tickets are available for all auctions and events at the gate and will cost you $80.00 for an adult and $65 for Seniors, Military Personnel, and Students. Childeren tickets cost $45.00.

At 9:00 am, the day starts with eBay offering an Exhibitor Marketplace for the entire day. From 9:00 AM to 11:00 AM, there will be an Automobilia Auction in the Auction Arena. Then, at 11:00 AM to Auction Close of Day, the main car auction starts of over 600 cars and celebrity cars. All auctions and events will be broadcast live over the internet and on TV & cable networks. (Broadcast times and channels are listed below)

Barrett-Jackson is providing a Live Internet Stream of all the events for all three days. To log on to the Live Stream go to Barrett-Jackson.com and click on the Watch Live button at the top of the website.

If you are lucky enough to make it to the event, you can experience an adrenaline-pumping ride with a professional driver on the Barrett-Jackson Performance Track from 9:00 AM to 5:00 PM. The racing event is billed as the “Dodge Thrill Rides” and “Chevrolet Hot Laps” and is fun for both kids and adults.

All day on Thursday, you can log onto www.BarrettJacksonFantasyBid.com and compete for prizes by guessing the winning bid a certain auctions. Additionally, you can also answer car trivia questions, participate in polls, and more. Barrett-Jackson is offering a host of daily prizes! 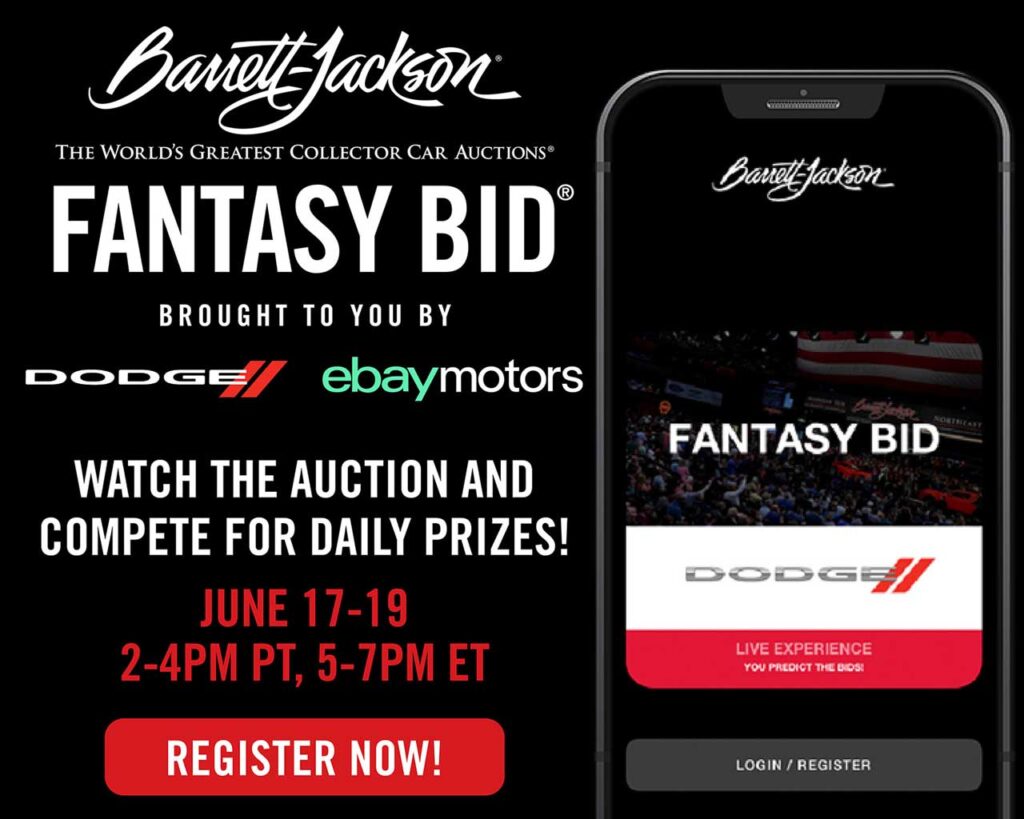 Win prizes for guessing bids and answering car trivia questions at the Barrett Jackson Website. Prizes and award are presented at the end of each day!!!

The auction opens early on Friday, June 18, 2021, at 8:00 AM where Sponsor Displays are open
and an Exhibitor Marketplace will be prested by eBay Motors. From 9:00 AM to 11:00 AM, there will also be an Automobilia Auction. The most anticipated event of the day is the Vintage Car Collector Auction which starts at11:00 and concludes at the end of the day.

There will be a bonus Fantasy Bid Presented by Dodge and eBay Motors from 2:00 PM to 4:00 PM in which people can try to guess the winnings, answer trivia questions and participate in polls with daily prizes! You can participate by logging on to www.BarrettJacksonFantasyBid.com

Toyota sponsors the Barrett-Jackson Live Streaming Broadcast over the internet from 9:00 am until close. You can watch the Live Stream on a desktop computer or smartphone by logging into Barrett-Jackson.com and click on the “Watch Live Now” button. The Live Feed will be broadcasting the entire Automobilia Auction and “All the Cars Auctions.”

On June 19, 2021, on the final day, gates will open at 8:00 AM for sponsor displays and offer an Exhibitor Marketplace Presented by eBay Motors. From 9:00 AM to 11:00 AM, there will be an Automobilia Auction which concludes when the gates close. Saving the best for last, the Grand Finale Collector Car Auction will start at 1:00 AM and will conclude when the final gavel lands.

There will be a bonus Fantasy Bid Presented by Dodge and eBay Motors from 2:00 PM to 4:00 PM in which people can try to guess the winnings, answer trivia questions and participate in polls with daily prizes! You can participate by logging on to www.BarrettJacksonFantasyBid.com.

Currently, the action will broadcast LIVE across FYI and The HISTORY Channel Networks at the following times.

*** FYI is an American TV Channel Broadcast on the following broadcast networks.

Keeping up their longstanding commitment to philanthropy, Barrett-Jackson will also auction four vehicles for charity. These 100% charitable sales, with all fees and commissions waived, include a 1956 Chevrolet 150, 2021 Ford Bronco 4-door Badlands Raiders Edition, 2020 Chevrolet Camaro ZL1 Hertz/Hendrick Motorsports Edition, and 2021 Dodge Durango SRT Hellcat AWD. All of the funds generated from the sales will benefit nominated charities for individual vehicles, which can be found on Barrett-Jackson’s Charity Auction Docket. 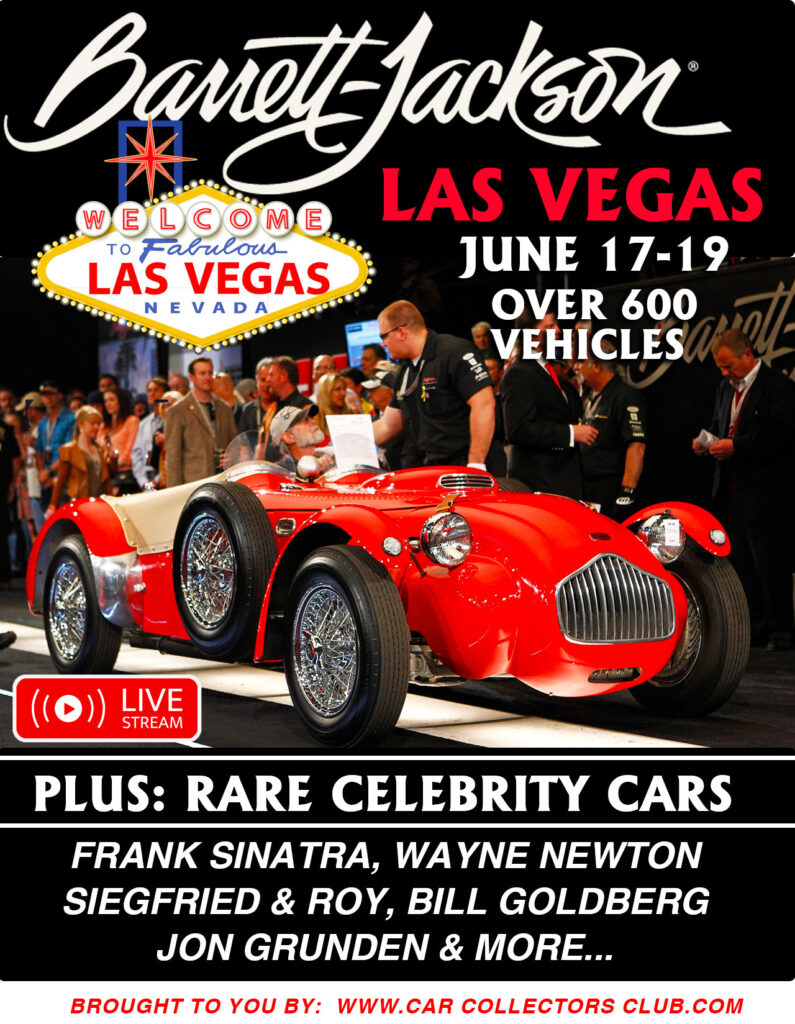 ABOUT THE BARRETT-JACKSON AUCTION COMPANY

Established in 1971 and headquartered in Scottsdale, Arizona, Barrett-Jackson, The World’s Greatest Collector Car Auctions, is the leader in collector car auctions and automotive lifestyle events, which include authentic automobilia auctions and the sale of private collections. The company produces live auctions across the country each year. With broadcast partners A+E Networks, Barrett-Jackson will feature live television coverage in 2021. Barrett-Jackson also endorses a one-of-a-kind collector car insurance for collector vehicles and other valued belongings. For more information about Barrett-Jackson, visit www.barrett-jackson.com, or call 480-421-6694. 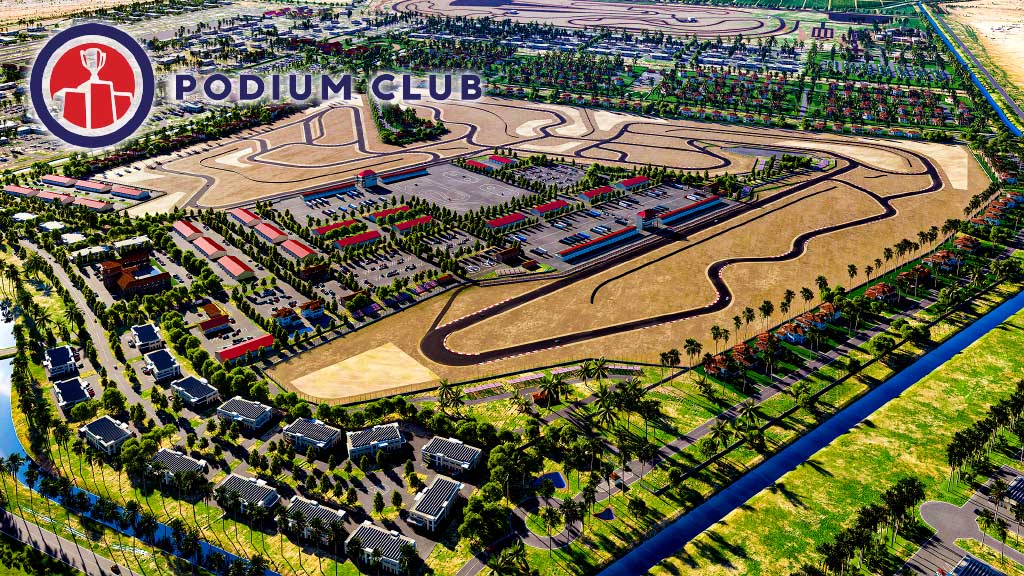 The Podium Club is for drivers and riders who want to pursue their passions on a safe, fun, and challenging circuit. The 445-acre complex, located less than an hour from Phoenix and 65... 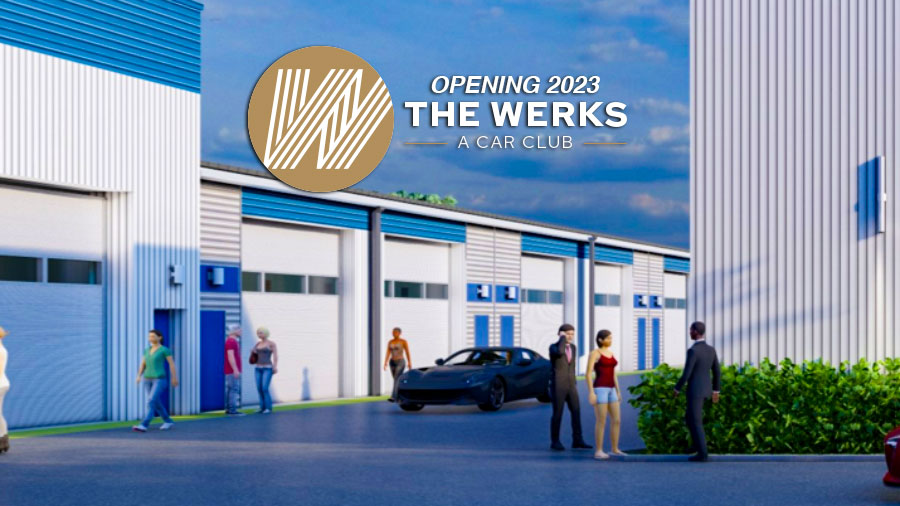 The Werks Car Club is a new car community set to open in Cornelius, North Carolina in 2023. The car club will provide car enthusiasts with shared car experiences, as well as private car...

Bentley Motors and Dezer Development have announced the opening of the sales gallery for Bentley Residences Miami, the newest luxury condominium skyscraper in Sunny Isles Beach and the... 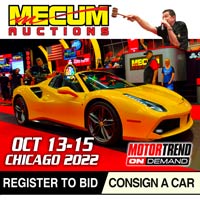 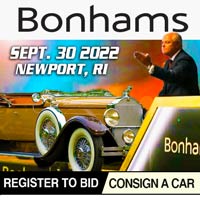