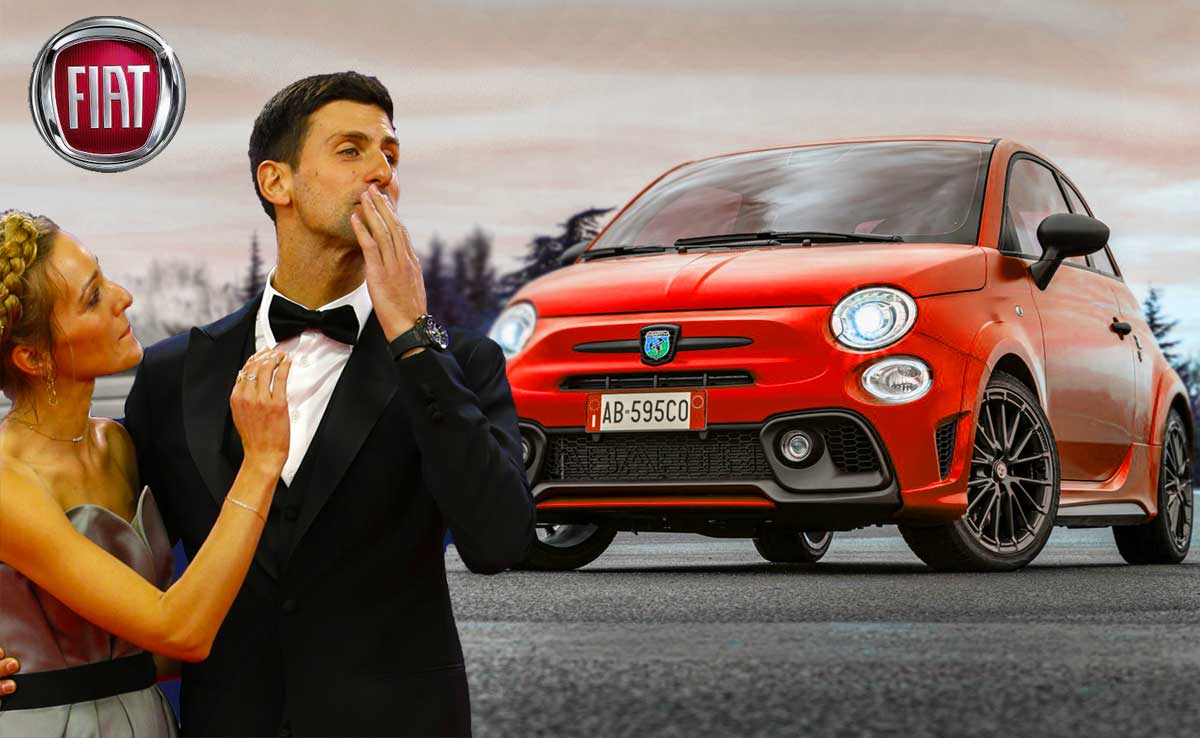 Novak Djokovic a five-time Wimbledon champion is now on his way to become an all-time major’s tennis champion if he is able to defeat Matteo Berrettini in the 2021 Wimbledon Finals on July 11, 2021. The match is to take place at the legendary All England Club in Wimbledon, London and if Djokovic wins, it will escalate Djokovic to equal the all-time men’s record of 20 major victories set by Rafael Nadal and Roger Federer.

Djokovic is now one more victory away from retaining the crown he won in 2018 and 2019, and therefore equalling the all-time men’s record of 20 major victories set by Roger Federer and Rafael Nadal

Novak Djokovic is currently the number 1 ranking tennis player in the world. He is even considered to be one of the best tennis players to ever play the game. But did you know that Djokovic was challenged by the Audi Racecar team to see if their Audi race car was faster than the champion tennis players’ serve?

“Djokovic took the challenge and here’s what happened.”

Djokovic used a new HEAD Graphene Speed tennis racket and served the tennis ball at the exact same time that an Audi R8 LMS race car screamed past the starting line.  As a result, the tennis ball crossed the finish line a split second before the Audi Racecar –  leaving Djokovic undefeated once again. 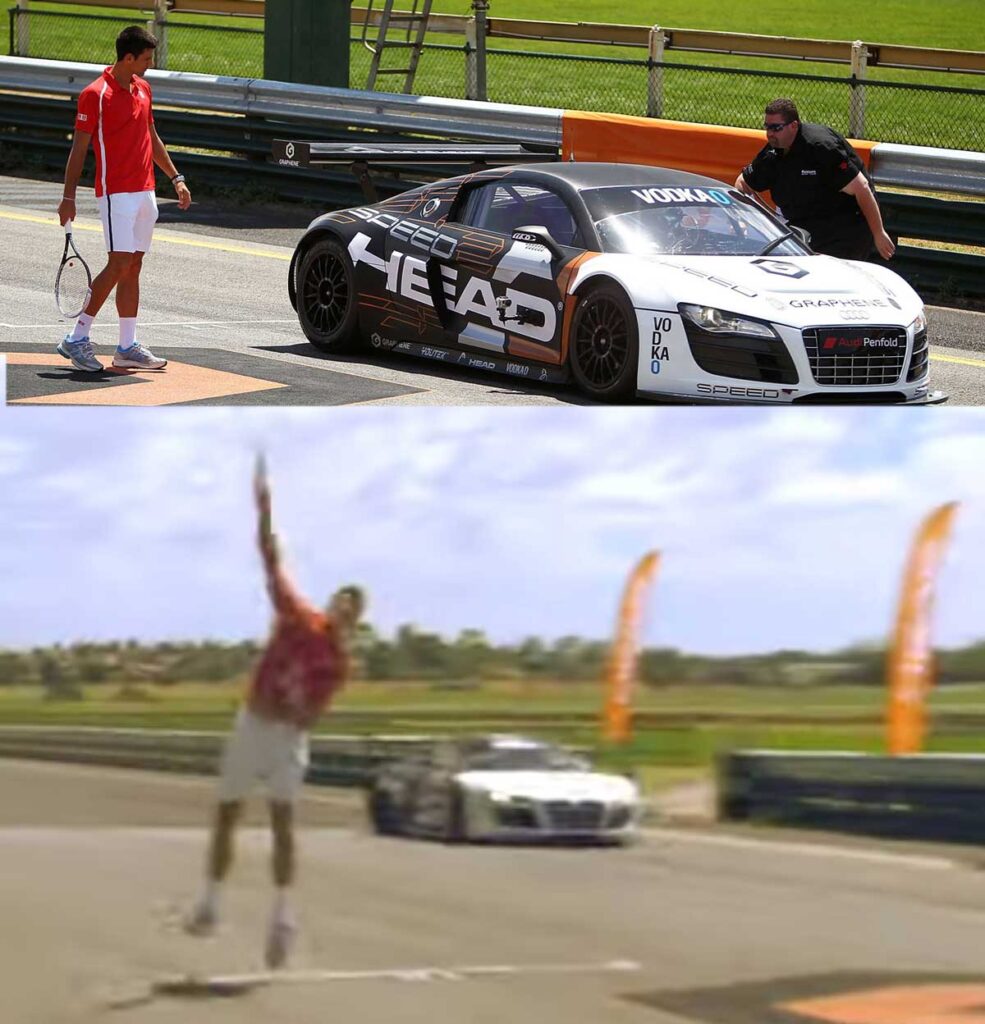 Novak Djokovic has always had a love for cool cars. Over his 15-year championship career, he has been seen in many different vehicles. Likewise, he endorses major car brands such as Peugeot, Audi, and Mercedes.

He loves the idea of environmentally friendly cars and even owns a couple of EV’s (electric vehicles). He is often seen driving a Hybrid-Electric technology 508 Peugeot Sport which is a combination of an electric and engine. 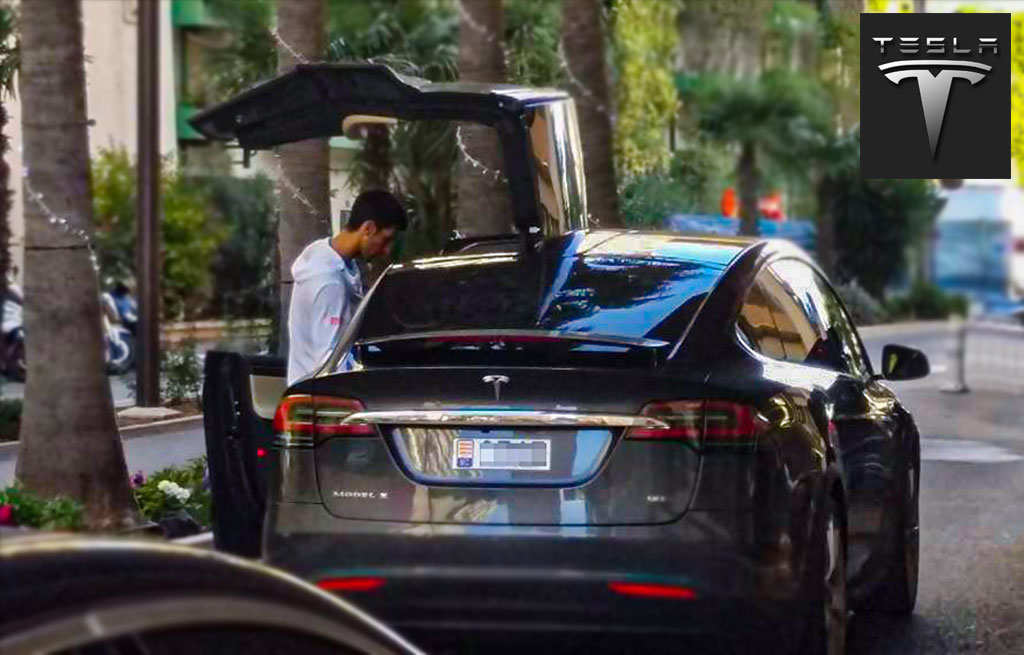 As Djokovic is an EV enthusiast, we have been asked: “Does Novak Djokovic own a Tesla?” Well, yes Djokovic does own a Tesla.

As a matter of fact, someone recently took a picture of Djokovic getting in a Tesla Model X – Racket and all. (see picture above) 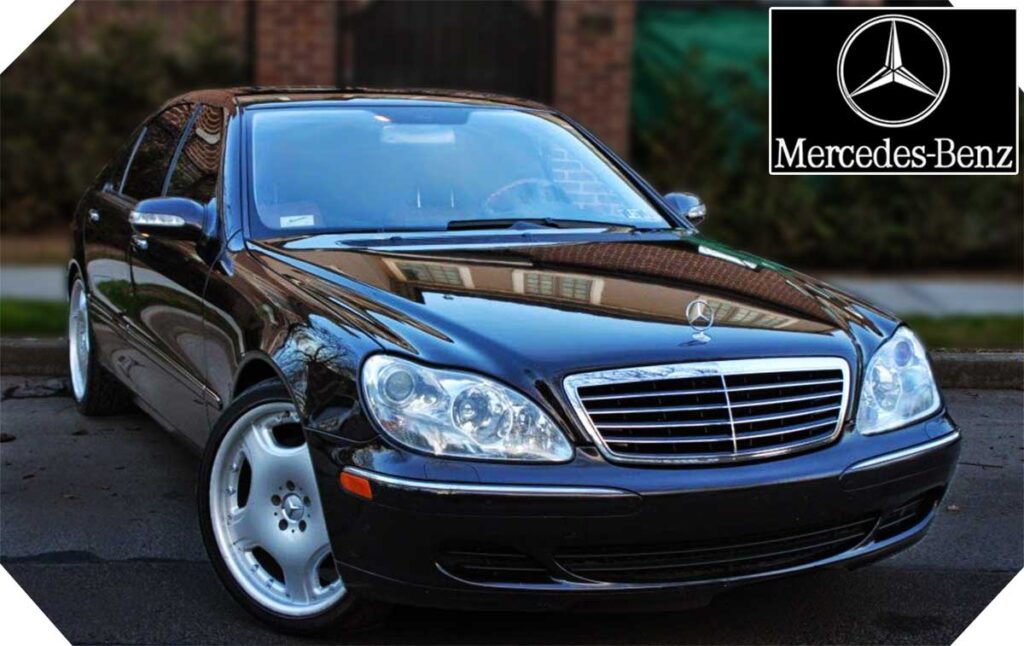 Djokovic’s relationship with cars also extends into endorsements. He has inked endorsement deals with auto manufacturers Mercedes-Benz and Peogout. As a result, Djokovic owns and drives the sponsor’s cars. Namely a Peugeot 508, top of the line, Mercedes-Benz 500s. 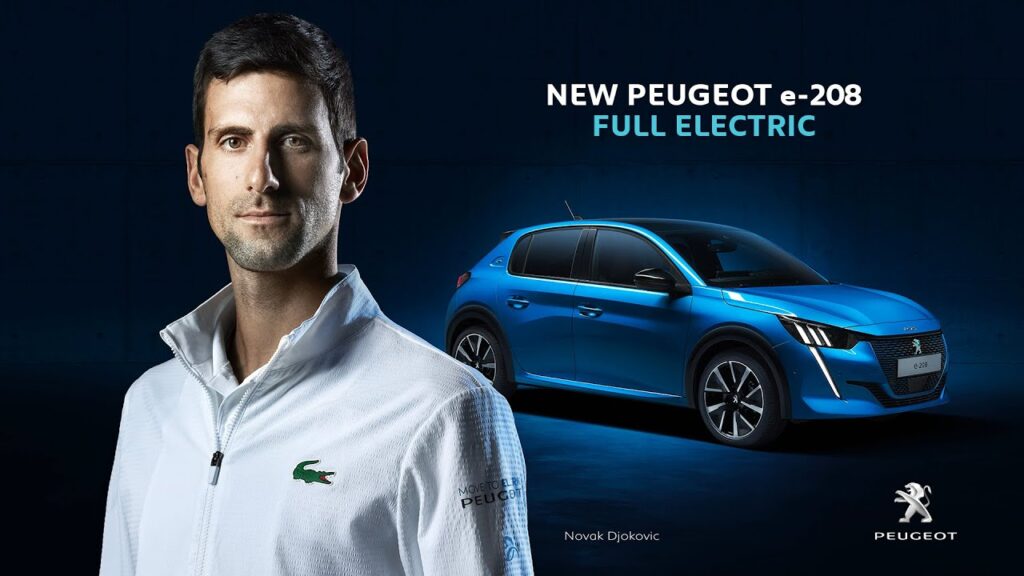 Djokovic has become a wealthy man over his professional tennis career, and along with that, a luxury lifestyle soon followed.

Beyond his affinity to electric vehicles, Djokovic does steer toward luxury cars. And though he is not a supercar fan, he has managed to build a car collection that includes luxury marques owned by the rich and famous. 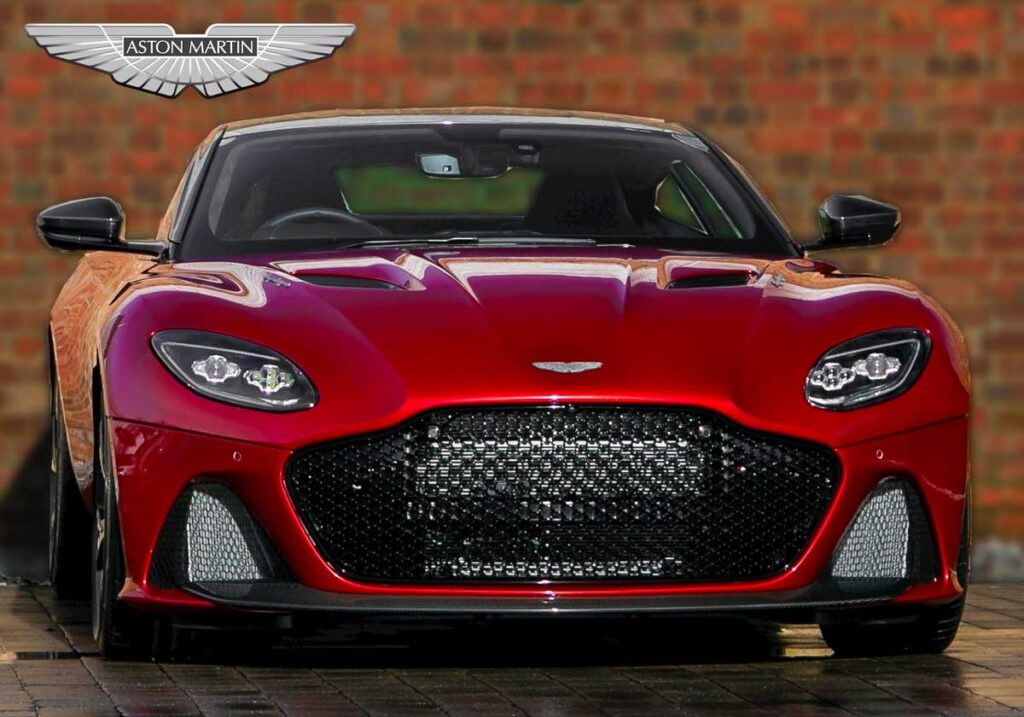 Djokovic married his high school sweetheart, Jelena Ristić, back in 2005. Since then they have had two sets of twins. Two identical boys, and two identical girls, so now he’s a family man.

As other cars make better family cars, the Aston Martin Martin DB9 is the car that offers an escape and peace and quiet. Out of all the cars in the Djokovic car collection, The Austin Martin DB9 is by far one of Novak Djokovic’s favorite cars.

This car is powerful, exquisite, and fast. Impressively, the Aston Martin DB9 sports a powerful 6.0 liter V12 engine that produces a whopping 540 hp. It launches the car from 0-60 in only 4.6 seconds. Moreover, it has a top speed of over 180 mph. 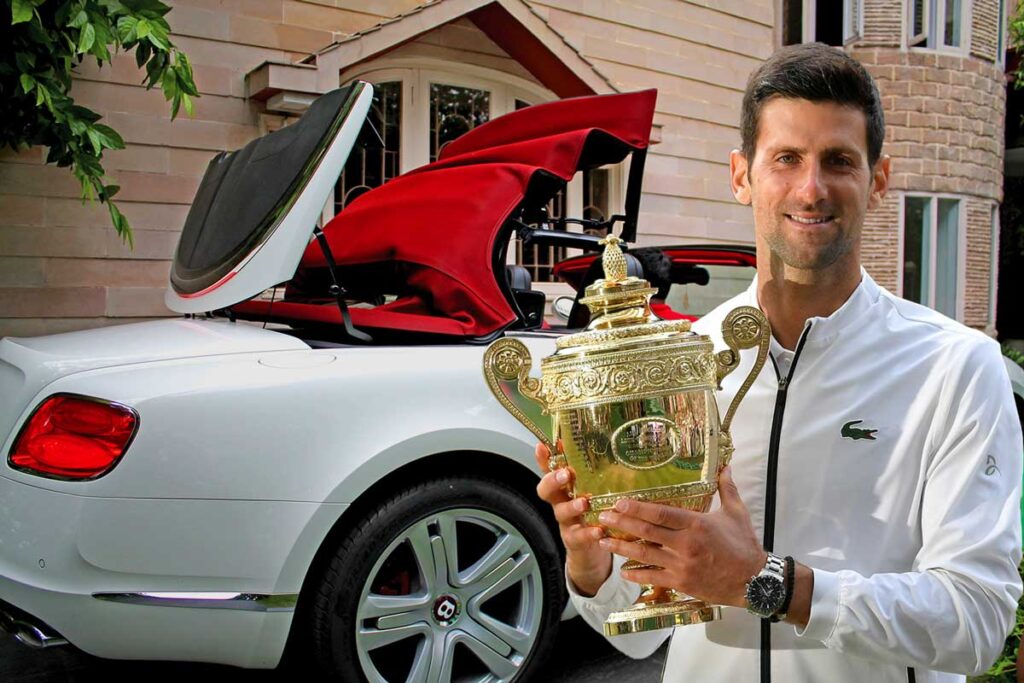 The oh-so-famous Bentley GT Coupe in ice white with a red top is Djokovic’s most luxurious. Additionally, it is the top car driven by celebrities.

Bentley has a long history in automotive history. They were founded back in 1919 in the United Kingdom by W.O. Bentley as a car of quality, luxury, and performance. Having some of the most successful race cars of the era, Bentley’s racing days are long gone, but as a car manufacturer, quality and performance are still top-notch.

Djokovic’s Bentley GT Coupe is a great example of this. Moreover, the Bently GT is by far the most luxurious marque in Novak Djokovic’s car collection. The price for this car starts at just over $225,000 and is by far the most owned car by both the rich and famous and celebrities. It was voted a 9 out 10 “must-haves” on CarBuzz, and is one of the few cars to consistently carry a five-star rating.

Beyond elegance, the car is fast. This massive car holds a powerful 6.0-liter engine that provides over 600 HP. The GT is geared to go from 0 to 60 in just 3.5 seconds and has a top get-away speed of 208 mph. 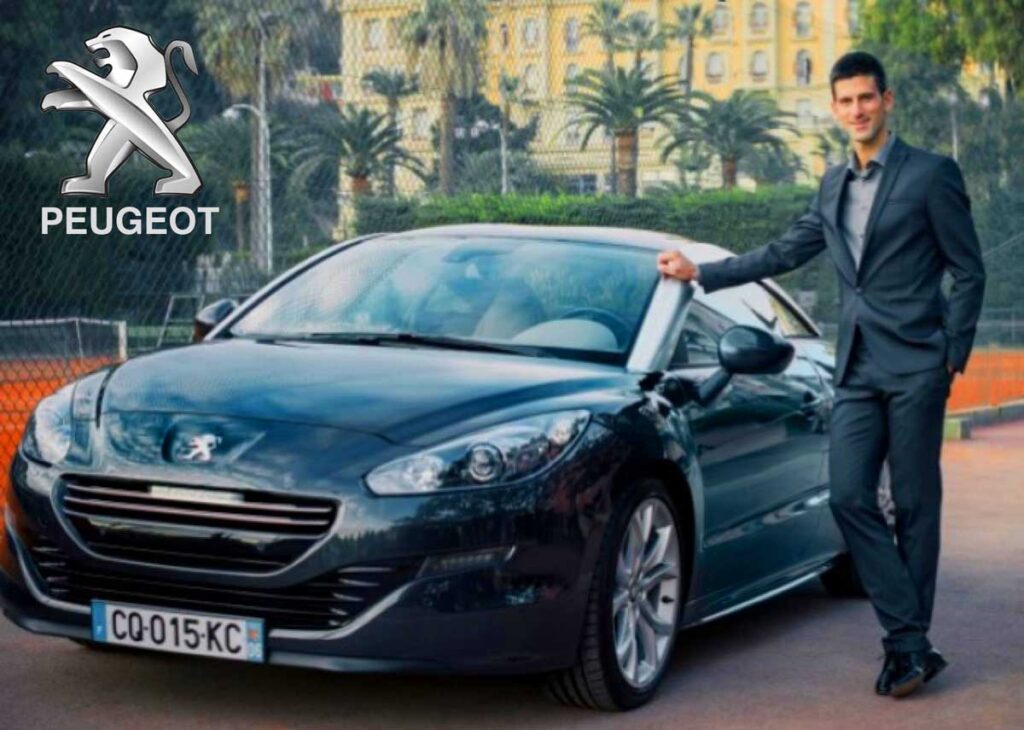 From Novak Djokovic, Car Collection is a Peugeot 508 PSE where he is a Brand Ambassador

The champion has driven Peugeot vehicles since near the beginning of his career. One of his favorite models is the Peugeot 508 PSE which holds a permanent place in his car collection. When asked, this is what Djokovic had to say about his relationship with Peugeot:

Djokovic States, I’m happy to represent the great French automobile manufacturer. They are recognised throughout the world and with a deep history going back some 200 years. I recognize that Peugeot embodies French auto elegance, style, refinement and an appreciation for a certain art of car making”

The Peugeot Sport 508 PSE is half electric (EV) and half internal combustion engine (ICE). It has a small Flat-4 with a1.6 liter engine, and two electric motors, that together, provide 197 hp. The car is economical, zippy,  and fun to drive. Additionally, the car has an 11.8kWh built-in battery that allows for a range of 31 miles in electric-only mode.

In combination, the EV and ICE propel the sedan from 0-60 in only 5.1 seconds. The all-wheel-drive (AWD) hybrid powertrain provides 355 horsepower and will race up to an amazing 155 miles per hour.

I would say that Novak Djokovic is serving breakpoint to Roger Federer and Nadal Rafal who both own tremendous car collections.

There are many other professional tennis players that have outstanding car collections.

Most notable is Roger Federer who is known by many as the greatest tennis player to ever play the game.

Roger Federer is also sponsored by Mercedes-Benz. He has one of the largest Mercedes car collection we have seen. His collection includes a diverse number of some of the most notable Mercedes Models to hit the road.

A little less known is Ash Barty. She has been known to sport around in a Rav 4 and a Jaguar F-Pace SUV. She has come a long way since her first car was a Ford Focus.

But, Rafael Nadal is the king of tennis greats that collect cars. He has cars of all kinds and one of the few to own a Ferrari or a supercar.

Although Nadal is sponsored by conservative South Korean car company KIA, he loves to drive and escape in one of his many luxury sports cars.