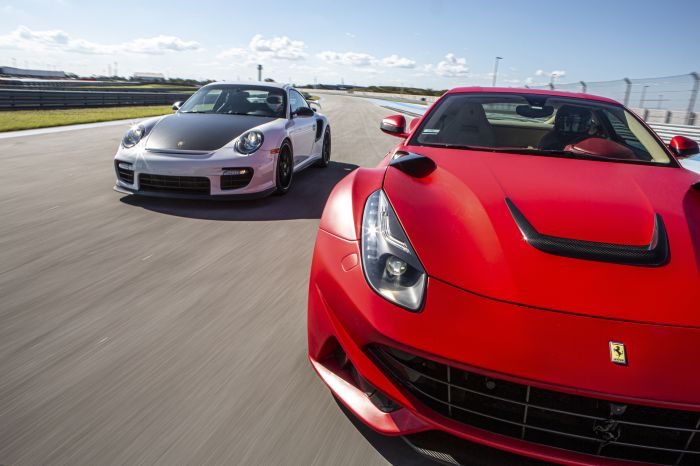 This Private Car Club has everything including a $220 million racetrack, spa, restaurant, and bar. It is exclusive and luxurious as well as private and prestigious.

Whether you want to bump elbows with celebrities, network with top car collectors and businessmen, or escape from your local noise – this car club is for you, and a must-see.

Located just outside Miami Florida, this Private Concours Club is a $220 million Automotive Country Club that includes a 2-mile racetrack, a super-spa, an elegant restaurant, top entertainment, and a deluxe bar and drink area.

But this club is different. For instance, Porsche has built what is called the “Porsche Drivers Experience Center” to be used in conjunction with the race track for professional driver training courses. The club is targeting exclusive and private membership.

This new Miami Concours Club is something different. It is hyper luxurious, ulta-exclusive, and security and privacy is top-notch. And best of all, it has an award-winning Indy race track designed by a world-famous Indy race car driver that is strategically placed on 75 acres of private land.

The club is private and exclusive. There are 40 founding members who each paid $350,000 for a lifetime membership.

South Florida resident and three-time Indianapolis 500 winner Hélio Castroneves was an early champion of the club, drove the planned circuit in digitized form, and made suggestions to improve the club. 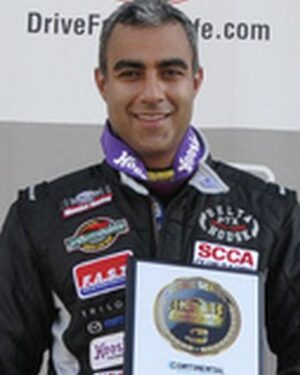 Interview with The Concours Club Founder, Neil Gehani, 3-time Indy 500 Winner, Helio Castroneves, and Circuit Designer, Alan Wilson talk about The Concours Club and the attributes that make it one of the most unique automotive country clubs in the world.

The 75-acre site is not only near downtown but on the grounds of the Miami-Opa Locka Executive Airport, providing easy access for the many out-of-town members.

The Concours Club offers one of the most modern and technologically-advanced driving circuits in the world, conceived by the legendary and multi-award winning designer, Alan Wilson.

Designed to meet or exceed internationally recognized standards and equipped with the latest technology, The Concours Club will provide unparalleled levels of safety to its members and their guests. 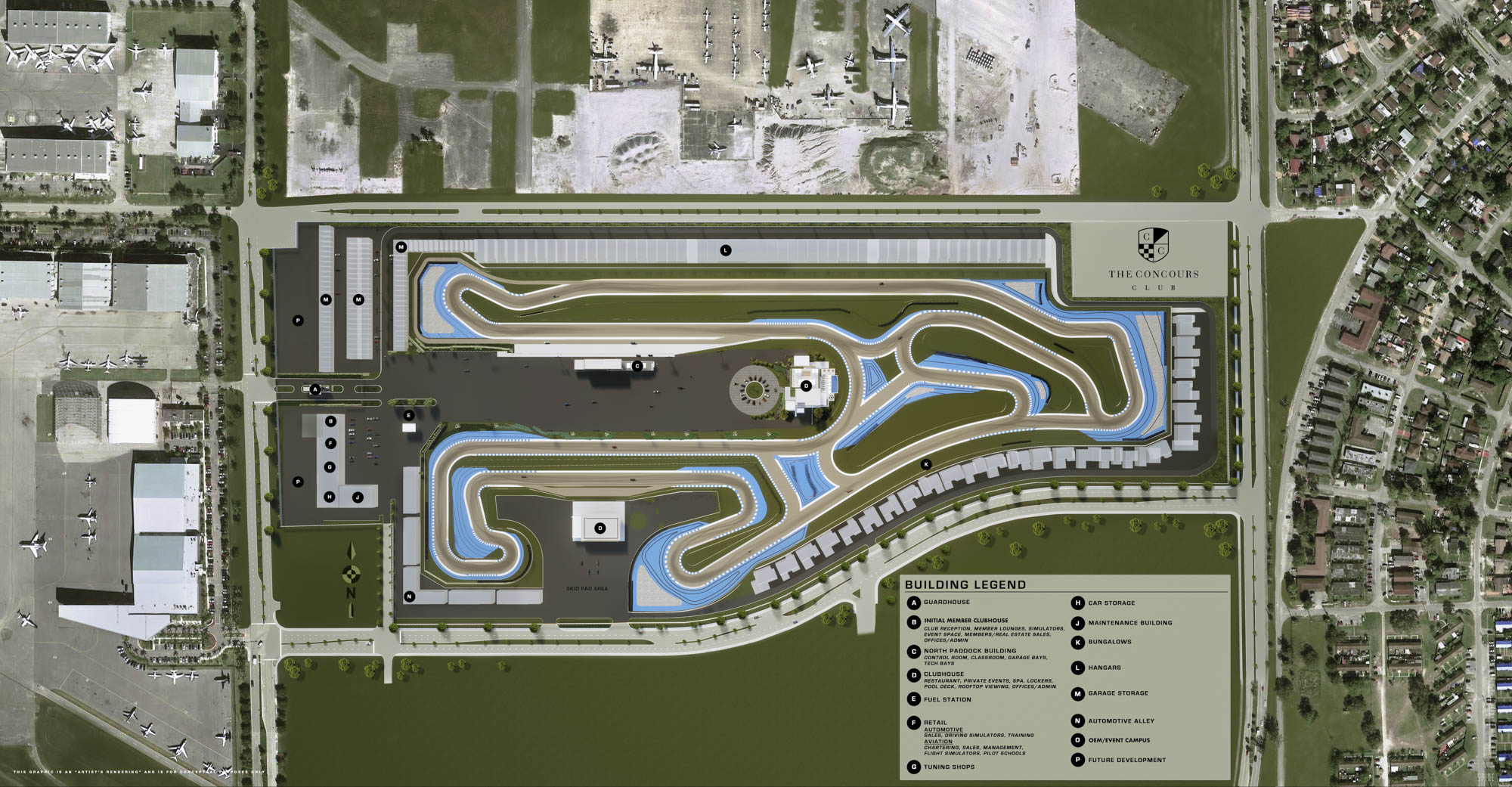 The Concours Club uses a separate entrance and house for the inevitable corporate-sponsored track days, which always spring up on premier tracks and dilute the exclusivity experience for members. Let’s just say that if you’re keeping your Hennessey Venom F5 parked there for flying at 180 mph down a back straight, you don’t want to have to dodge a group of reporters testing out Audi’s latest station wagon.Source: 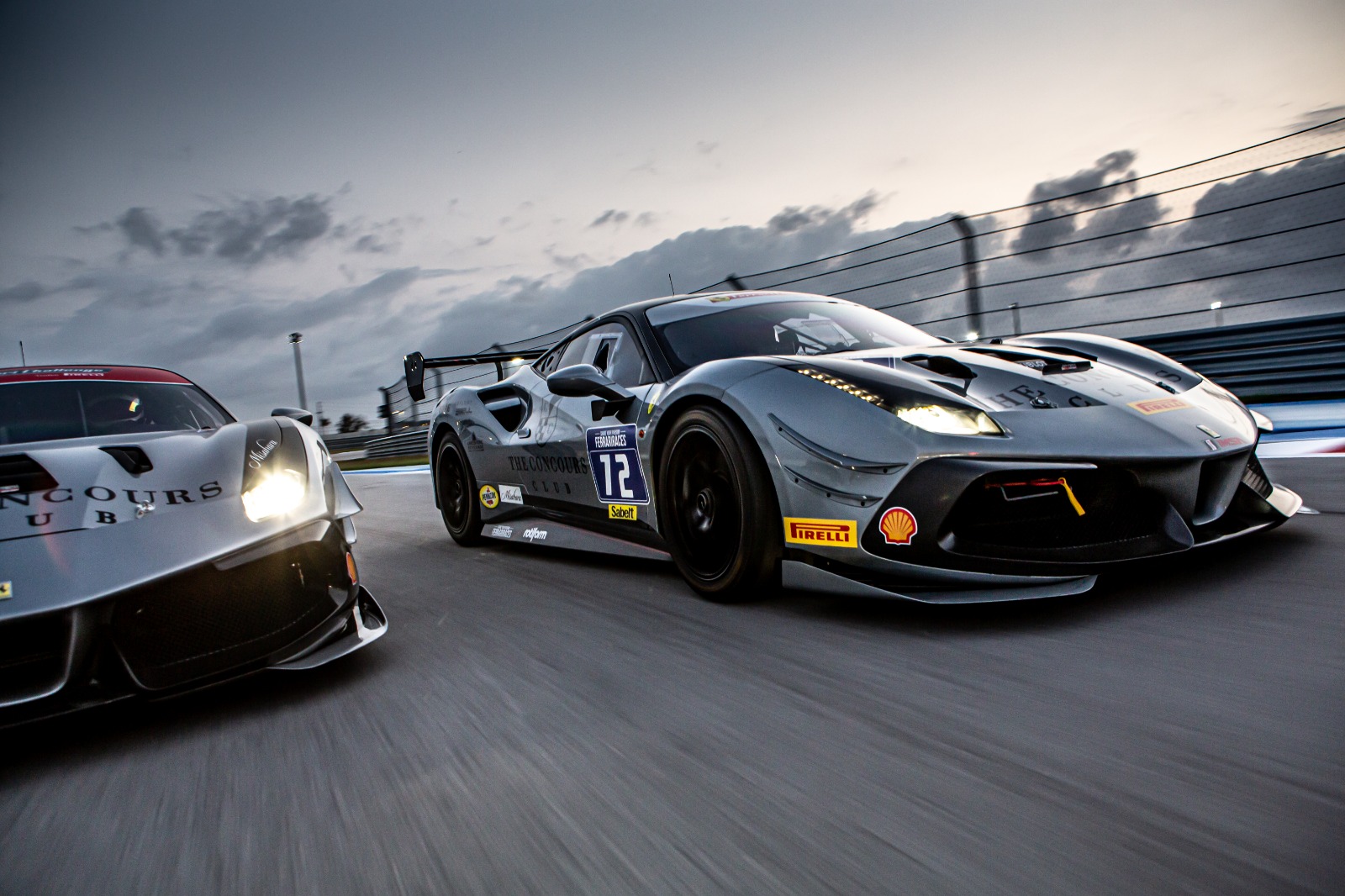 Members, half living outside Miami, will be able to keep their cars in the club’s 48 garages, available for sale or rental with more than 700 spaces total.

And they can have their vehicles inspected for track fitness, serviced, or upgraded by the in-house team from HP-Tech Motorsport, a successful South Florida-based Ferrari Challenge competitor.

And some track cars will be on hand if members don’t have their own ride handy.

Gehani, who has had a home in Miami for 16 years, is the founder and chief executive officer of the $1.7 billion Trilogy Real Estate Group, which operates in nine states with multi-family development. Concours is his passion project, with a $95 million investment so far. 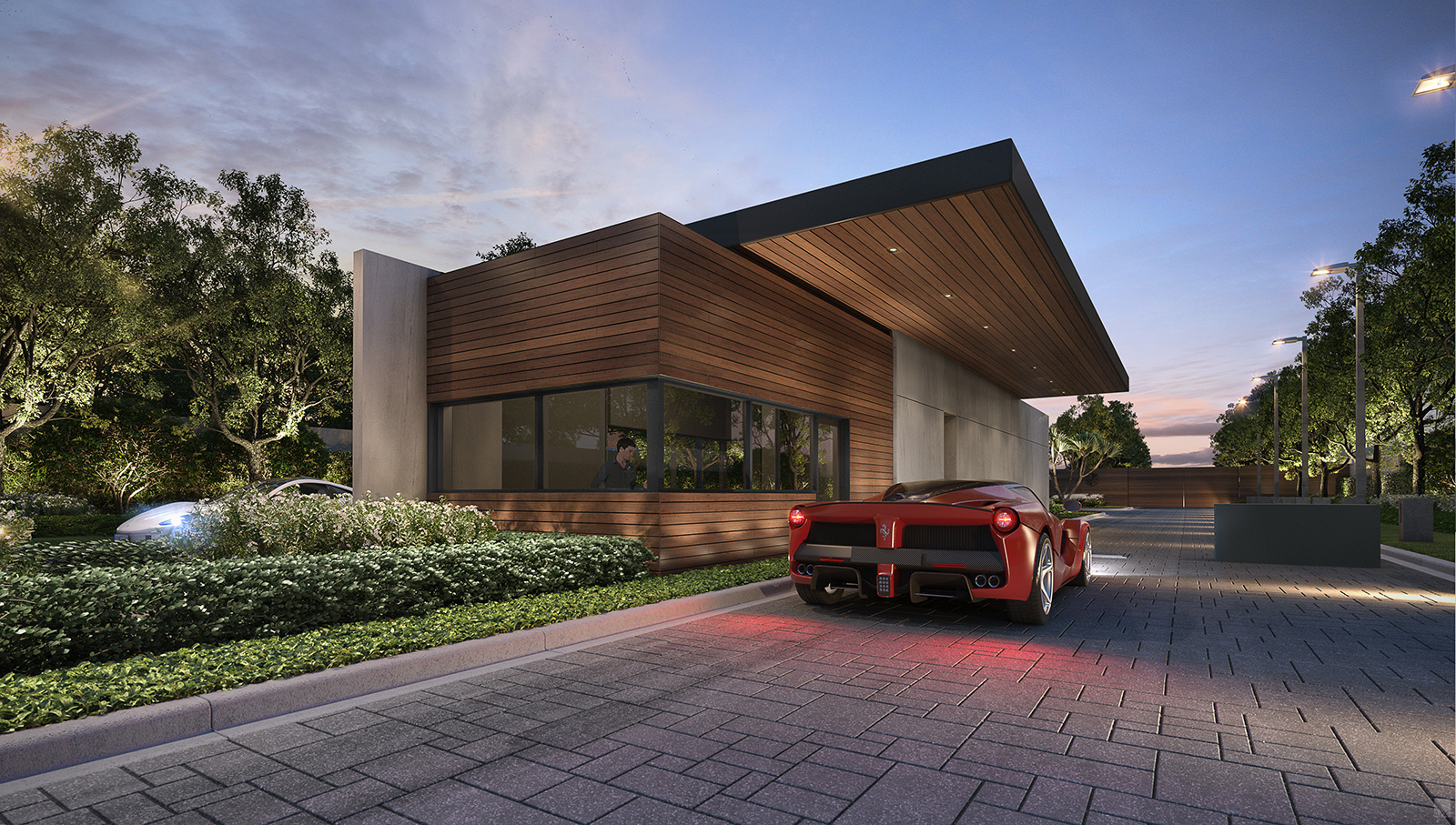 Gehani says he started out as a tax attorney, didn’t care for the work, and moved into real-estate development. His first modicum of success led to the purchase of a Porsche 911 and then a GT3, fueling an abiding interest in fast cars.

He joined the Autobahn Country Club outside Chicago in 2006, and made frequent use of its private track, eventually competing in events such as the aforementioned Ferrari Challenge (emerging as a North American class champion in 2019).“In thinking about a club in Miami, I studied how the existing race track projects operated,” Gehani says. “And none of them were actually in the city, with some being hours away.

We’re based at a regional airport, and just 13 miles from downtown Miami, nine miles to Miami International Airport and 14 miles to Miami Beach. You could come here to drive on the track at noon or 1 p.m. and still be home for dinner. If you don’t want to drive, you can eat while your car is being detailed. Our concierges will curate your day.” 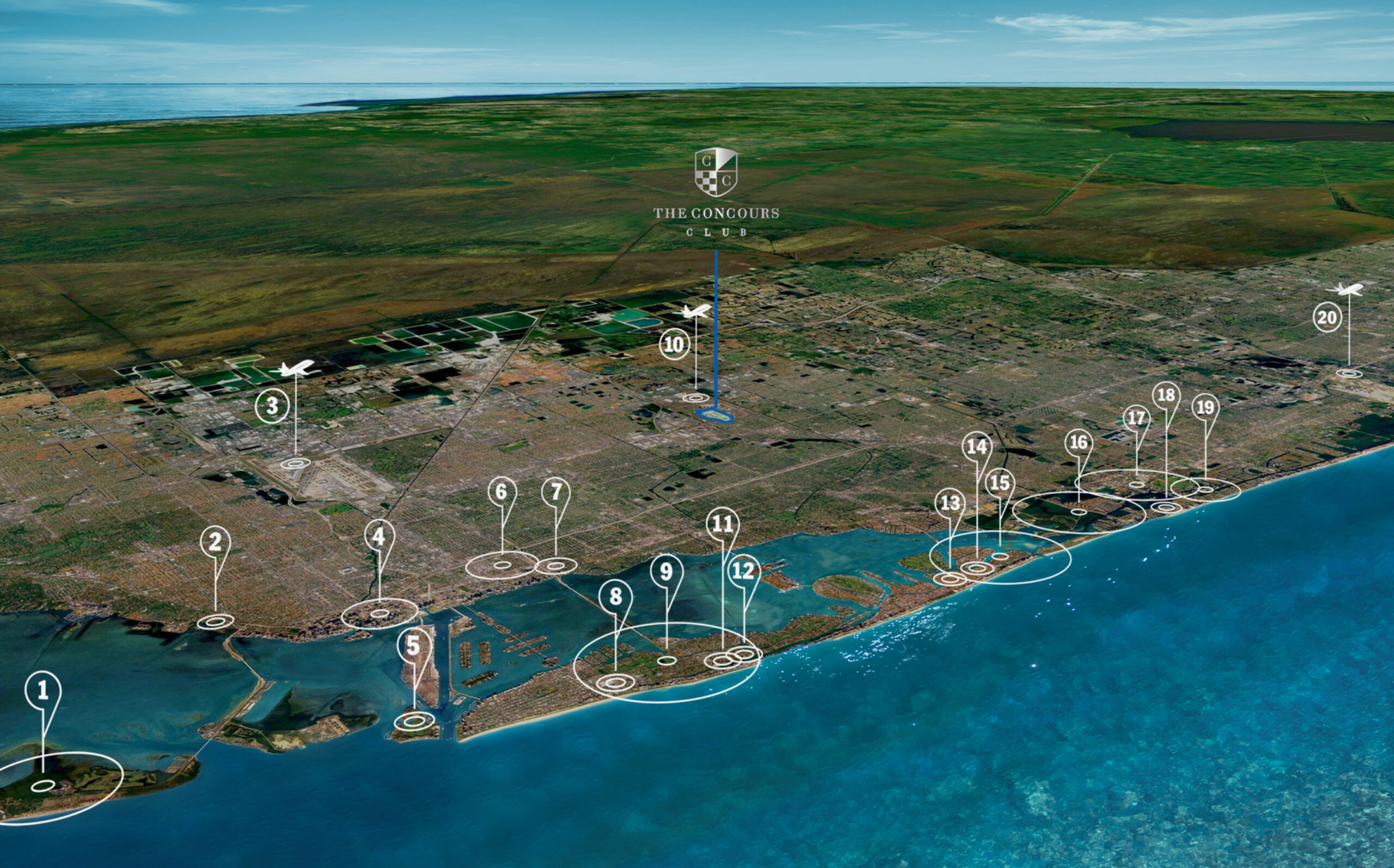 Above Photograph: The perfect combination of automotive and aviation facilities is contained within an exclusively gated campus. The Concours Club is a quick drive from the heart of Miami’s global culture, pristine beaches, unparalleled cuisine, entertainment and business centers.

Driving Distance to Club in the Miami Area

The Concours Club is set up for corporate events, including new car model introductions, and there will be driving instruction headed by Jon Branam, an experienced Ferrari coach, and Walt Disney stunt driver.

But actual races won’t be held on the track—the goal is drivers competing against their own former lap times. The corporate events facility was styled by famed Italian auto design firm Pininfarina, whose U.S. branch is located in Miami.

While it waits to open, Gehani and his team are fine-tuning the nearly completed facility—a $500,000 redo of the track’s first turn, for instance, to make it more exciting—and preparing for a grand opening that, because of these troubled times, has no firmly set date. “We expect to be fully open in the fourth quarter of this year,” Gehani says. “It’s a private club, so it won’t be like reopening Disneyland.”