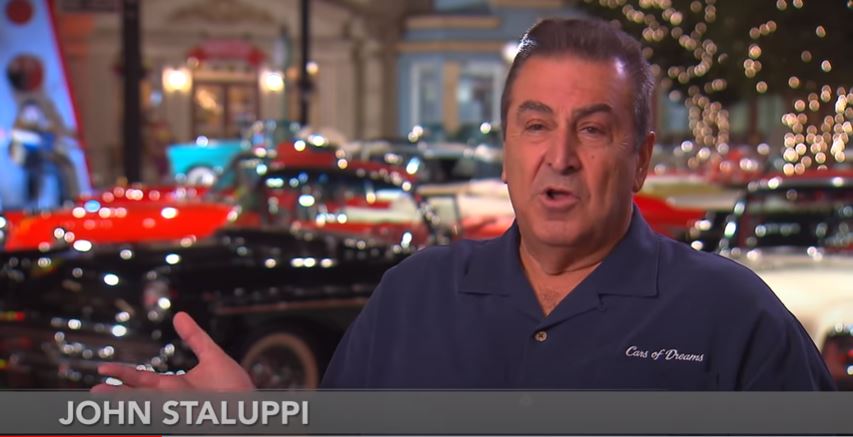 The Spectacular Collection of John Staluppi 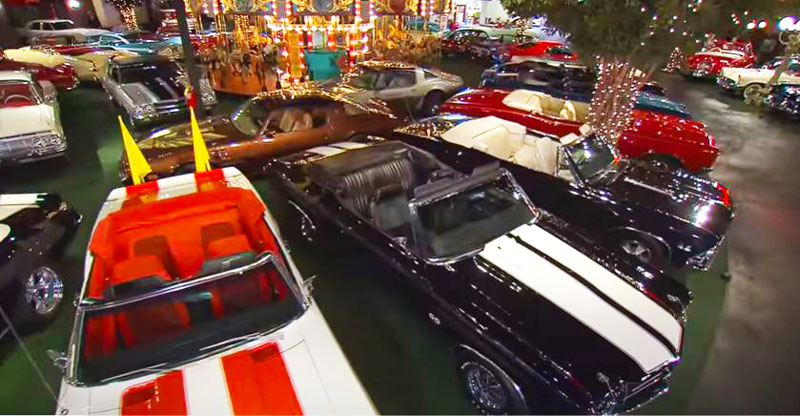 After he reluctantly sold the Vette, he was able to find, re-purchase, and restore it years later. “It is the focal point of his collection today, his favorite car and one of three he won’t sell,” Bennett explains. “This is actually the third time he’s completely sold his collection. After this, he’ll start again with new goals in mind.

In addition to collecting cars, John meticulously builds mega-yachts for personal use which he names after James Bond movies, such as his most recent award-winning “Spectre.”

Staluppi enthusiastically collects across marque and model and particularly loves convertibles and ’50s cars. A magnificent 1953 Buick Skylark Convertible, for example, has been restored in Matador Red with a two-tone red and white interior.

From 1955 is a Cadillac Eldorado, the third year these marque flagships were made; it has the 331-CID V-8, automatic transmission, power steering, brakes, seats, and windows. Liveried blue with matching blue inside, it’s one of 3,950 Eldo top-downs produced that year.

How Much Is John Staluppi Car Collection Worth?

About the Cars of Dreams Museum
The John Staluppie Car of Dreams Car Collection and Museum is located at Village Shoppes  on 133 U.S. Highway One, North Palm Beach, Florida 33408

It was quite a payday for John Staluppi as he cashed out of his 145-car collection, housed in Palm Beach, Florida. The cars were part of Staluppi’s “Cars of Dreams” museum, which went under the auction gavel this past weekend at Barrett-Jackson’s annual Palm Beach sale, returning $13.96 million, an average of $96,276 per car.

Heesen Yachts is a Dutch shipbuilding company that specializes in custom-built superyachts. Founded in 1978, it has launched more than 170 yachts since its inception, many of which have gone on to win awards. It is considered one of the world leaders in the design, construction, and engineering of all-aluminum yachts.[1]

John Staluppi’s has one of the largest private classic car collections in Palm Beach County, Florida. The museum’s Coney Island theme features much of the memorabilia that is reminiscent of the iconic amusement park.

The design features bumper cars, a beachfront boardwalk with a Carvel ice-cream store, Nathan’s restaurant, hand-painted murals of the Parachute Jump, and the world-famous Cyclone rollercoaster. For a full description with a video and photo gallery, please view About the New Cars of Dreams Museum.

“John’s collection of vehicles and his museum are just remarkable,” Bennett says.

“An exciting headliner at the 2018 Barrett-Jackson Palm Beach Auction, April 12-15 at the South Florida Fairgrounds, will be 140-plus remarkable vehicles from the collection of businessman and philanthropist John Staluppi.”

“Staluppi, also known for his empire of auto dealerships and collection of superyachts, has been a car collector for decades. The selection of vehicles headed to the Palm Beach Auction – currently housed in Staluppi’s North Palm Beach Cars of Dreams Museum – represent nearly a century of American automotive design. The diverse group, all of which will be selling at No Reserve, are predominantly convertibles from the ’50s, ’60s and ’70s, along with custom vehicles and Resto-Mods.”

Born in 1947 in Brooklyn, New York John Staluppi started his life from humble beginnings. His father, Francis, was a hard-working electrician who worked two jobs to make ends meet and his mother Millie was a homemaker.

It was the 1950’s the golden years of the American automobile. There would never be another era like it and John Staluppi was fortunate enough to have witnessed the innovation, imagination, and vision in the automotive industry.

Even though his father encouraged him to become an electrician, John was already bitten by the car bug. His father did, however, teach John the value of quality, hard work, family, and friends. John went for the American dream and had the courage to do what he really loved – to be a part of the automotive industry in America.

He was rebellious and had a run-in with the law in his youth, but was able to move forward in a constructive manner. He started out as a 16 year old mechanic.

John was motivated and talented and soon became an expert in cars. It was at this time that his dad recognized John’s exceptional drive and decided to help. His father took out a loan so his son could run a Sunoco station. John Staluppi was incredibly grateful to his father for his support and guidance during that time.

Through creative marketing, John was able to make this and other gas stations a success. With these successes and practical experiences, he was able to take a risk on a venture called Honda – an unknown name at the time. John Staluppi was, however, able to see its potential. Within a decade of hard work he owned close to 20 dealerships and the Honda name took off.

His commitment to Honda made him an integral part in shaping the automotive industry. Next was Hyundai, another solid success. The Hyundai investment proved his solid business philosophy – which is to stay with quality franchises, focus on a particular market and try to get the best people.

Through all successes, he always made sure he put people first. John is proud of the fact that there is a sign in all his dealerships that reads “Every visitor to our dealership is an honored guest in our home, every day, every time, without fail, no exceptions”.

John Staluppi also expanded his interest into the yachting industry, since he had always enjoyed boating and sportfishing in the 70’s and 80’s on Long Island. John Staluppi had the motivation and character to succeed at anything he put his mind to. So he created magnificent Super Yachts, that surpassed any other line in creativity, beauty, and speed.

However, John Staluppi ‘s successes were never just for him. He vowed that if ever really made it – he would help those less fortunate. He grew up with an intimate knowledge of people who have a tough life – and now he feels an obligation to help needy people have an easier life in some way.

The list of charities and fundraisers that John is involved with is long. National Kidney Registry, to Make a Wish Foundation, John Staluppi says that each charity event keeps him down to earth. When a child hugs him for granting his wish (Make a Wish Foundation) or when he can provide state-of-the-art wheelchairs for spinal cord injury victims (Darrell Gwynn Foundation) – John Staluppi says “ I hope this is my legacy.”

Cars of Dreams Museum is not open to the public. The Museum is only open for select charity events.