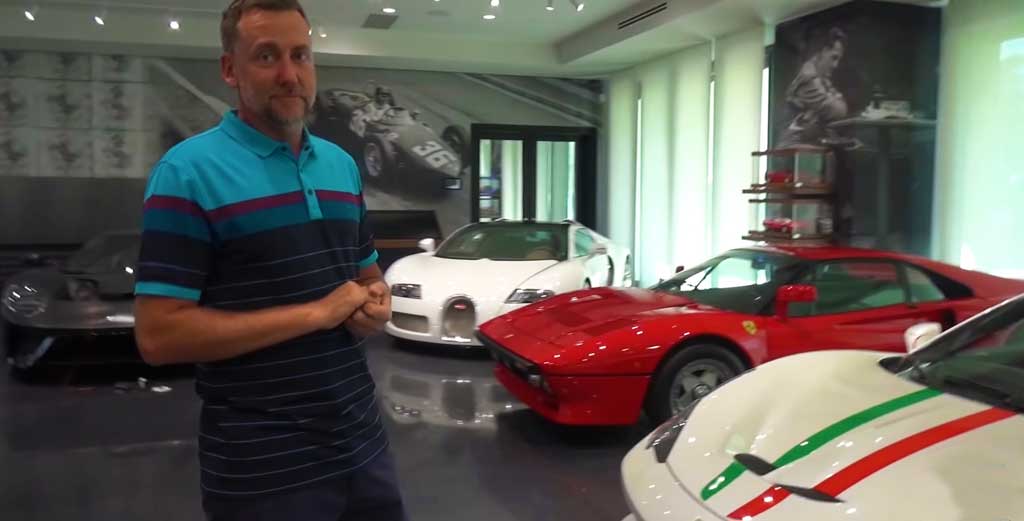 Ian Poulter has had a tremendous career as four-time a Ryder Cup champion and is an accomplished European and PGA Tour golfer. He has a beautiful Orlando Florida mansion, an amazing family life, and an itch that keeps him buying some of the finest cars in the world.

The Ferrari Super Cars include a 1985 Ferrari 288 GTO, Ferrari F40, Ferrari F50, 2002 Enzo Ferrari, and two LaFerraris. Altogether, this collection is worth seven times more than the original selling price at over around $3.5 Million Dollars.  Ian Poulter’s total car collection is worth over of $25 million and builds value year ager year!

But Ian Poulter loves cars and has since added more Ferrari and exotic sports cars to his car collection. They include a Ferrari F40, 550 Barchetta, a 1986 Ferrari Testarossa, and a 275 GTB.

Despite having an award-winning Ferrari supercar collection, Ian Poulter also owns a Mercedes AMG GTS, a Mercedes G63, a Ford GT, and a Porsche Porsche 911 GT2

First off is the Amazing Ferrari F40. 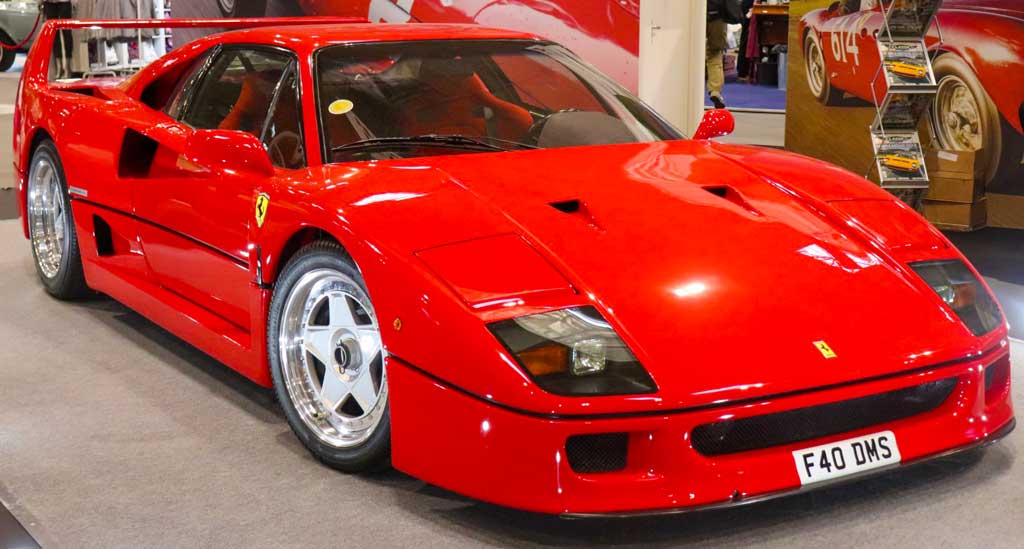 Ferrari F40 – The Ferrari F40 (Type F120) is a rear-wheel-drive, mid-engine sports car created by Nicola Materazzi with styling by Pininfarina.  The F40 is the immediate successor to the 288 GTO .

It was specifically designed to celebrate Ferrari’s 40th anniversary and was the last Ferrari to be approved by Enzo Ferrari before his passing.

Ferrari Enzo – The second car Ian Poulter purchase was an Enzo Ferrari which is slightly less powerful than the LaFerrari. The car was developed in 2002 using Formula One technology and includes a carbon-fiber body and F1-style and an automated shift transmission.

An Enzo Ferrari originally would cost you around $650,000 dollars and today is worth well over $1 Million. The Enzo was initially announced at the 2002 Paris Motor Show. 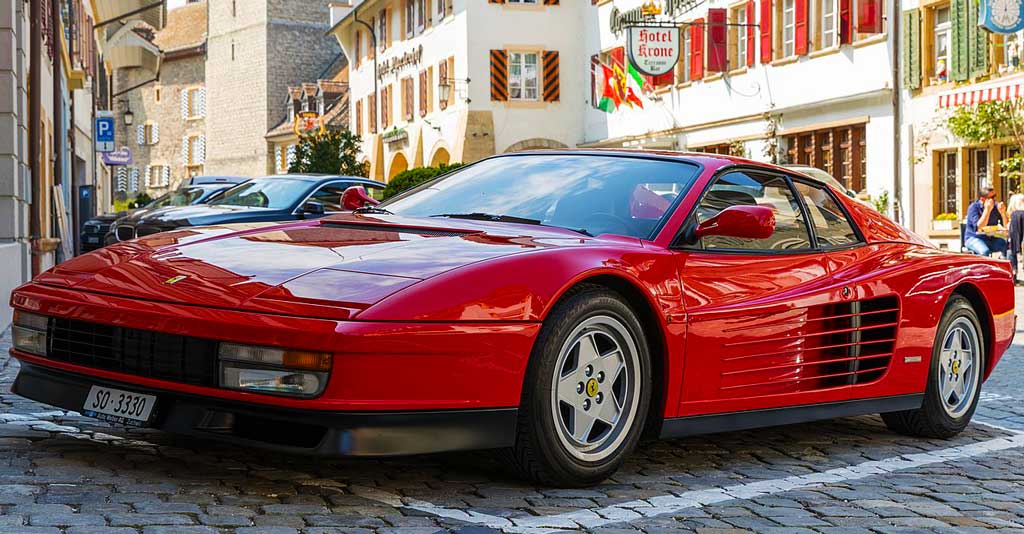 Ian Poulter bought this car for his father as it was his favorite car growing up in the UK. This particular Berlinetta Bodied Testarossa has less than 400 miles and is one of the most famous Ferrari’s ever produced as it was made iconic from the TV Series “Miami Vice”.

This Testarossa is a two-door coupé that premiered at the Paris Auto Show in 1984. The car shipped with a is a powerful 12-cylinder 4.9 L Tipo F113 or Tipo 113 B Ferrari flat-12  mid-mounted engine 5-speed manual transmission. The engine produces 380-hp and a top speed of nearly 180 mph.

The Ferrari Testarossa is the successor to the Ferrari Berlinetta Boxer and was produced from 1984 to 1991 as a Pininfarina-designed exotic sportscar. In total, almost 10,000 Testarossa’s were produced, making it the highest-volume Ferrari ever produced. 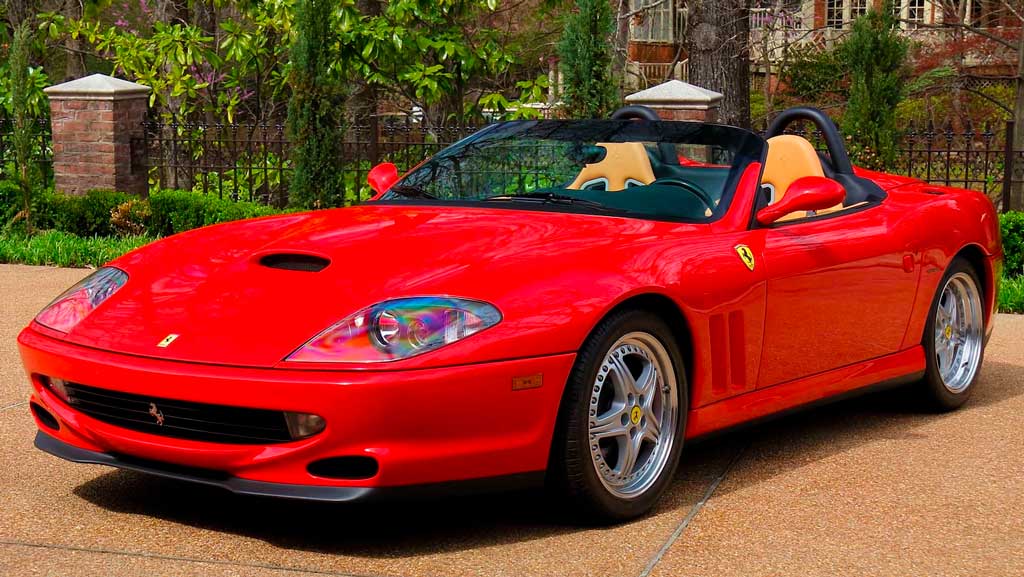 Ferrari introduced the 550 Barchetta Pininfarina in 2000 as a limited production roadster with only 448 vehicles produced. The 550 is a 2 seater and more of a grand touring car than a performance car. The 550 Barchetta was replaced by the newly designed 575M Maranello in 2002.

Ian Poulter bought this car when it was painted with a bright yellow color. Ian contacted a Ferrari restorer and had it restored to its original Ferrari racing silver color. This car won a Platnum award at the Cavallino Concours Car Show.

Motor Trend named the 275 GTB coupé/GTS spider as number three in their list of the ten “Greatest Ferraris of all time”, and the 275 GTB/4 was named number seven on Sports Car International’s 2004 list of Top Sports Cars of the 1960s. In a September 1967 road test, Road & Track described the NART Spyder as “the most satisfying sports car in the world.”

This Ferrari 288 GTO is one of Ian Poulter’s favorite cars to drive having had the opportunity to drive the winding roads in Europe. The 288 GTO is considered to be the first Supercar Ferrari ever produced. It is the predecessor to the iconic F40. The Ferrari GTO (often referred to as Ferrari 288 GTO)(Type F114) is an exotic homologation of the Ferrari 308 GTB produced from 1984 to 1987 in Maranello Italy.

In the Ferrari 288 GTO, what does GTO stand for? The GTO stands for designated GT for Gran Turismo while O for Omologata (homologated in Italian).

The 288 is not to be confused with the iconic 308 that was driven by Tom Selleck as Thomas Magnum in the 1980’s TV Series Magnum PI. Between 1984–1987 only 272 produced making it a very sought-after and collectible sports car.

The 2015 Ferrari 458 Speciale Aperta is a limited production Ferrari with only 499 produced. The Ferrari 458 was introduced in 2010 as the most powerful, beautiful, and technologically advanced mid-engined V-8 Berlinetta in the Ferrari’s history. Then in 2013 Ferrari introduced the 458 Speciale that featured 35 more horses and was 200 pounds lighter.As you probably already know, the Ferrari 458 Speciale Aperta is the hardcore and lightened version of the 458 Spider and launched after the wildly-popular 458 Speciale Coupe. What makes the Speciale Aperta particularly desirable is the fact that it is the last mid-engined supercar produced by Ferrari with a naturally-aspirated V8 engine and is bound to continue to gain value in the future. 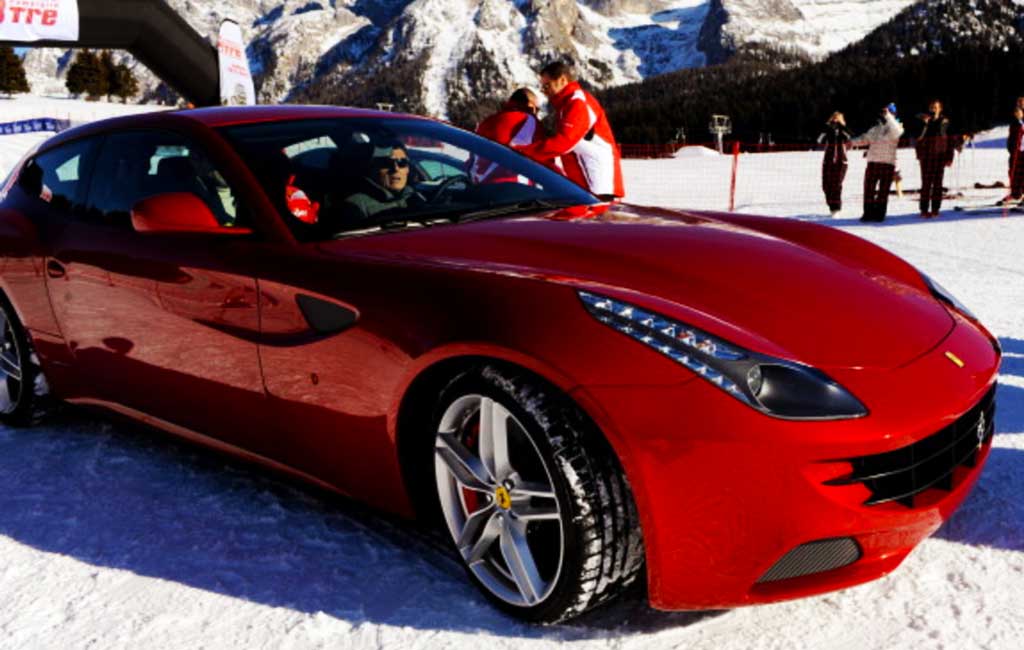 Billed as the replacement for the unloved 612 Scaglietti, the 2012 Ferrari FF draws the eye to it in a way the 612 never could. The wagon-like rear end (known as a shooting brake in European parlance) works well with the traditional Ferrari styling themes, stretching the car’s lines rearward to a pleasing tail end that doesn’t look truncated.

The FF’s massive 6.3-liter V12 engine routes 651 screaming horses to all four wheels via its 4RM AWD system, a first for Ferrari.

Despite the additional hardware, the FF remains safely under the 4,000-pound limit, ensuring its performance potential is not impeded in any way. The FF name refers to “Ferrari Four,” a play on the car’s 4-passenger. 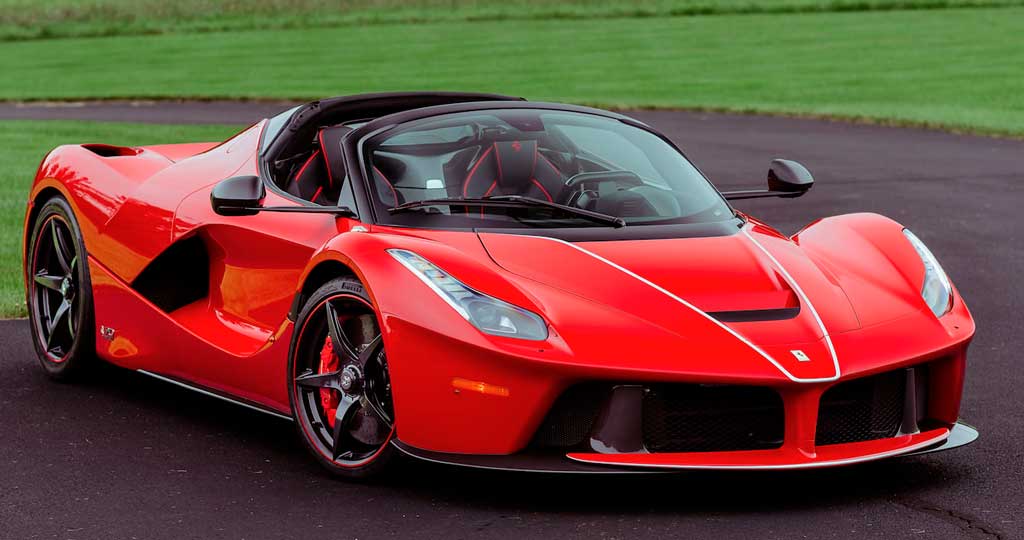 **Ian Poulter owns (2) Ferrari LaFerrari’s and is the most expensive Ferrari in the extensive collection of Ian Poulter. This Ferrari LaFerrari holds two records for the highest auction resale selling price $7 million and $10 million.

The LaFerrari Aperta is extremely rare as only 210 models were produced and only 200 were sold. Nine LaFerrair’s were reserved for the Ferrari 70th Anniversary celebration.

The main difference between the LaFerrari Aperta and other similar vehicles in its class is its new door rotation system. The LaFerrari Aperta’s doors are at a slightly different angle when open than the original coupe version.

The car features a high-performance 6.3 Liter F140FE V12 engine that accelerates the car  0-60 mph in just 2.8 seconds and has a top speed of over 220 mph. A new innovation for the time was also the high-performance electronic braking system.

A Ferrari LaFerrari Aperta can fetch up to $7 million at auction with low miles or $4.5 with average miles but in excellent condition. 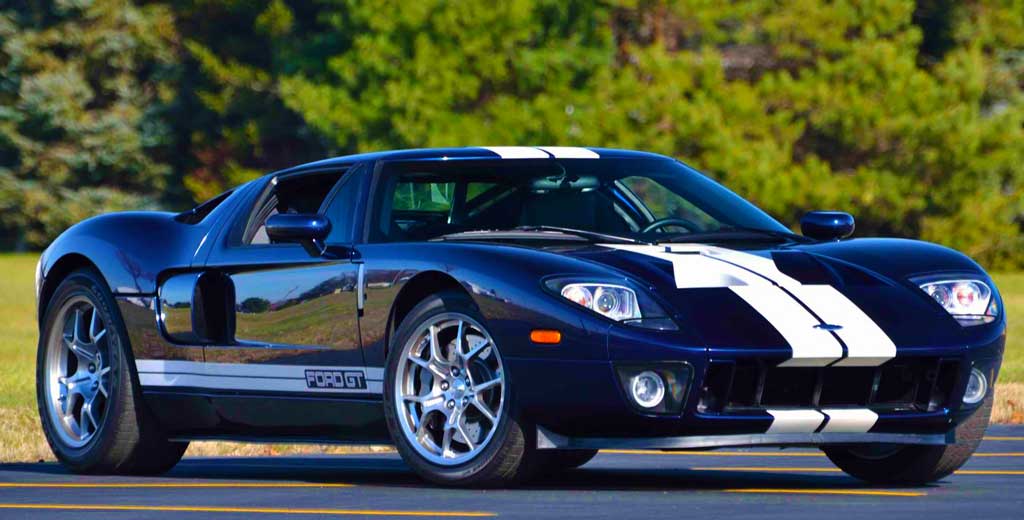 Though not a Ferrari, the 2005 Ford GT  is a breed of its own making. The GT Ford is a four-time winner of the 24 Hours of Le Mans repeatedly beating out the Scuderia Ferrari race team. Ford Motors manufactured this car in 2005 in ca conjunction with the company’s 2003 centenary.

The Ford GT is a mid-engine two-seater sports car with a5.4 Liter supercharged Ford Modular V8 engine. It is capable of accelerating from 0–62 mph in just 3.8 seconds and has a top speed of 205 mph. 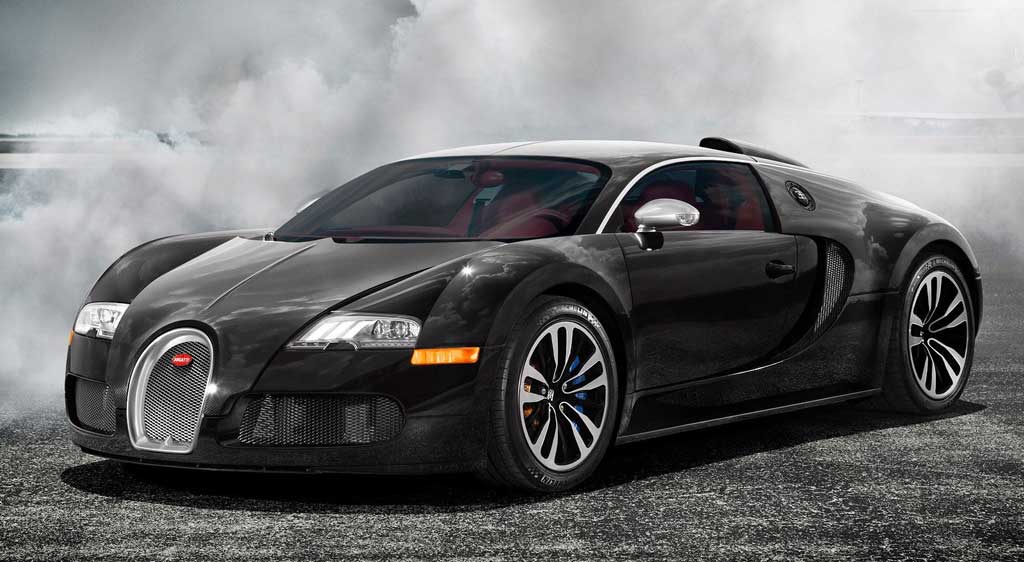 Ian Poulter owns the much sought-after Bugatti Veyron which garners a price well over $1 Million Dollars. It is a prized possession in anyone’s car collection.

This is Ian Poulter’s fast car in his collection.

This particular Bugatti Veyron has a high-performance 8.0 Liter quad-turbocharged W16 engine that can accelerate the 4,044 pound car from 0-60 mph in only 2.5 seconds and reach top speeds of up to 253 mph.

This car was awarded the  “Car of the Decade” by the Guinness World Record as the fastest street-legal car of its time (2016). Only 450 were built before The Bugatti Chiron replaced it in 2016.

The Ferrari F12 TDF is described as one of the best-built Ferraris of all time. Made largely of Carbon fiber, the car is a front mid-engine, a rear-wheel-drive grand touring sports car and made its first appearance at the   2012 Geneva Motor Show.

The engine is a naturally aspirated 6.3-litre V12 engine that accelerates the 3,351 lbs car from 0 to 60 mph in only 3.1 seconds and has a maximum top speed of over 211 mph. This powers a 7-speed dual-clutch automatic gearbox transmission and aluminum space frame chassis.

The price of a Ferrari F12 TDF is roughly $621,600 with low miles and in excellent condition. 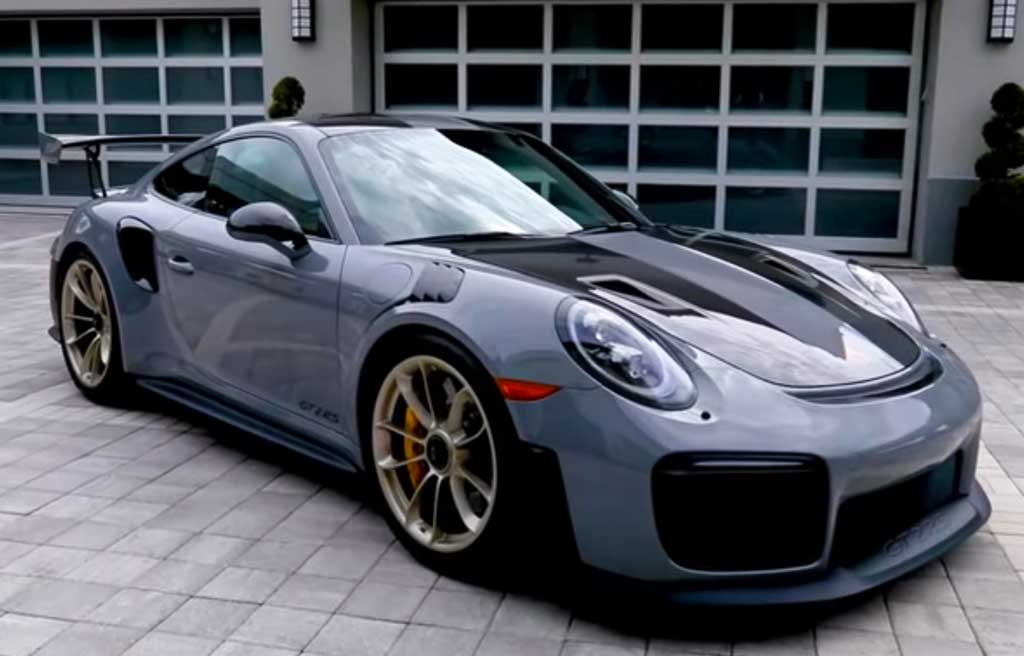 Ian’s newest addition to his car collection is the iconic Porsche GT 2RS in Nardo Grey. The car was officially launched by Porsche at the 2017 Goodwood Festival of Speed GT2 RS is the most expensive and fastest model among the Porsche 911 lineup.

The Porsche 911 GT2 is a high-performance, track-focused sports car manufactured from 1993 to 2009. Following the 911 GT2 came the GT2 RS. The RS has the same twin-turbocharged engine but features many improvements including larger brakes and a stiffer suspension.