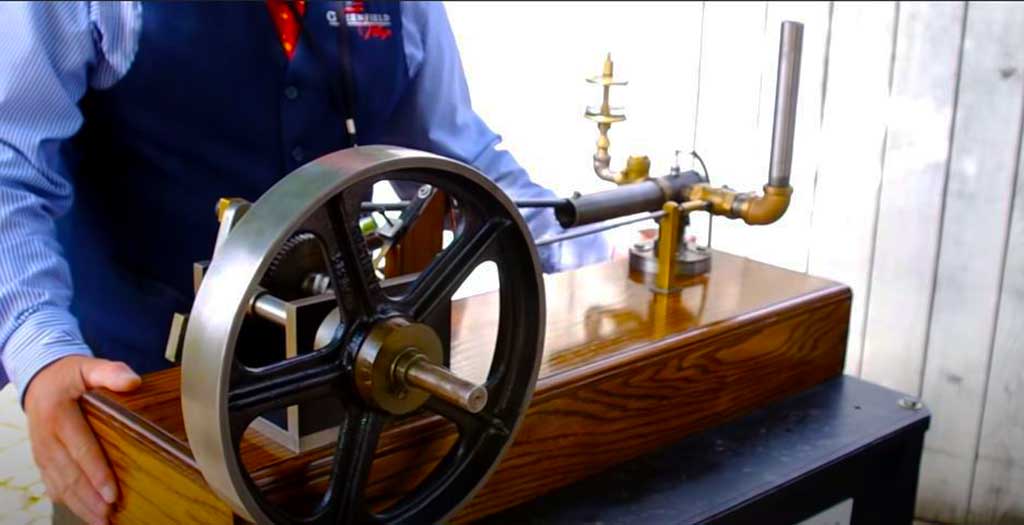 Henry Ford built his first experimental engine using scrap metal for parts. He tested it on the kitchen sink after supper on December 24, 1893. For ignition, he ran a wire from the ceiling’s light bulb. His wife, Clara, hand-fed the gasoline to the intake valve while Henry spun the flywheel. The engine roared into action, shaking the sink.

“In Ford Motor Company lore, the date is held to be December 24, 1893, Christmas Eve. The place was the kitchen of Henry and Clara Ford, in their apartment at 58 Bagley Avenue near present-day downtown Detroit. (Read about 58 Bagley Avenue here.) Henry worked the ignition and and spun the flywheel, while Clara fed the gasoline into the intake valve one and two drips at a time. When the simple, hand-built engine sputtered to life over the sink, Ford’s earliest dream was realized and his remarkable automotive career began.”

The story of Ford’s kitchen sink engine is equal parts fact and folklore, raising many questions, starting with the date of its creation. In the photo above taken at Ford’s Greenfield Village many years after the fact, the claimed date of invention is 1887, which is unlikely in the extreme. Ford made a habit of backdating his historical accomplishments, both to strengthen his legal case against the Selden patent and to burnish his own image as an automotive pioneer. Indeed, many folks believed that Ford had personally invented the automobile, and while he never made that claim himself, he seldom went out of his way to debunk it. The first car many Americans ever saw or rode in was a Ford, and in that sense the idea was true enough.

In Ford tradition, based in part on the recollections of Clara Ford, the engine first ran on Christmas Eve in 1893. However, several close associates of Ford place the date even later than that, in January of 1896. Oliver Barthel was a Detroit auto pioneer who worked with both Charles B. King and Ford on their earliest vehicles, including Ford’s Sweepstakes racer (read his story here). According to Barthel, he showed Ford two issues of The American Machinist magazine, dated November 7, 1895 and January 9, 1896, with descriptions of the Kane-Pennington engine, a simple four-stroke machine that could be produced from commonplace materials.

As Barthel told it, Ford-based his engine on this design, and Barthel himself saw it under construction and helped Ford to get it running. King, who also knew Ford well at the time, provided a similar account. And for whatever it’s worth, the Kane-Pennington engine in the magazine articles is remarkably similar to Ford’s kitchen sink engine, and to the two-cylinder version that powered Ford’s first automobile, the Quadricycle, which first ran in June 1896.

Whatever its date and origin, the kitchen sink engine is a clever device, as shown in the photo above courtesy of The Henry Ford. (The top photo is also courtesy of The Henry Ford.) The cylinder was a simple piece of black iron pipe, bored and honed on the inside to accept a piston of approximately one inch in bore diameter, while a simple rod-and-crank arrangement connected to the flywheel-slash-starting handle. The rest of the components were common hardware store and plumbing supply items. Generations of home machinists have copied the engine as a construction project, and plans can be found on the internet.

The electric lamp is included in The Henry Ford’s photo for a good reason: It was in effect the engine’s ignition system. The kitchen lamp was wired in series to a pair of metal contacts inside the cylinder, one fixed in place and the other mounted to the piston. When the contacts separated and the circuit opened, an electric arc sparked across the contacts, igniting the fuel/air mixture. “Make-and-break” was the popular term for this primitive but effective ignition system, which for road use substituted a battery and induction coil for the house current. Ford had a thorough knowledge of electricity in those days—he was the chief engineer at the Edison generating plant a few blocks away.

While it may not look like much to modern eyes, the kitchen sink engine was an essential first step in the process that would eventually put America on wheels. If you would like to see it in person, the engine is on permanent display at the Henry Ford Museum of Science and Innovation in Dearborn, Michigan.