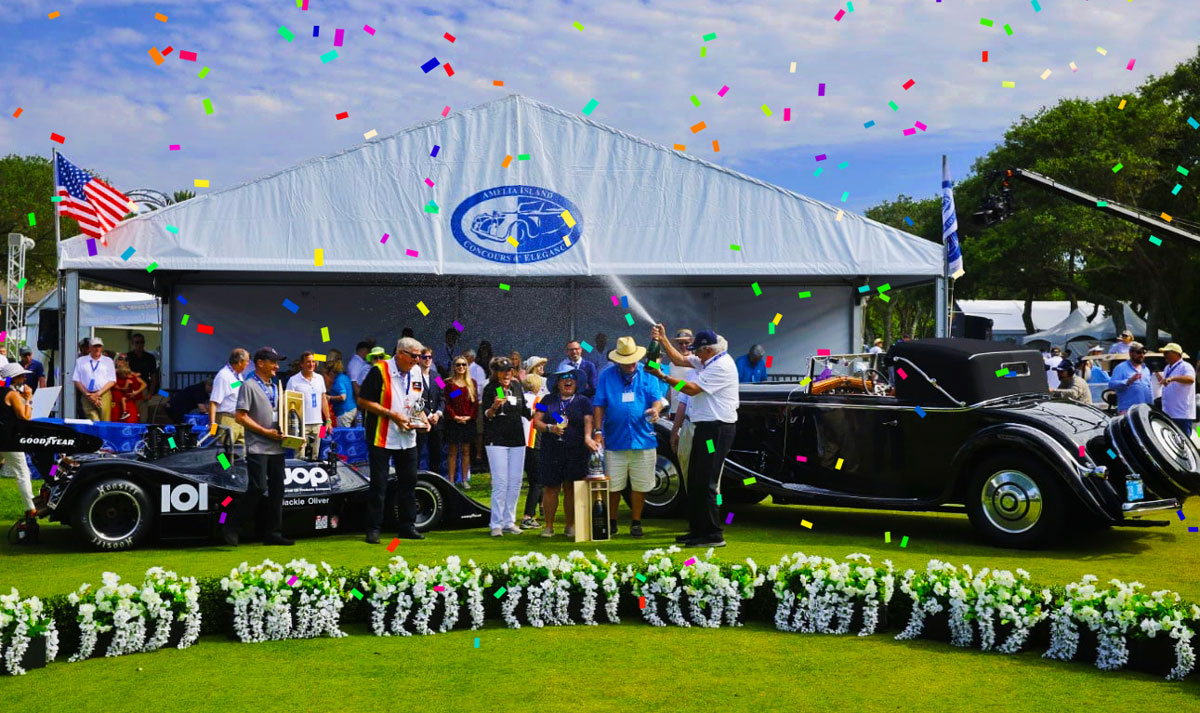 Congratulation and celebrations to Jill and Charles Mitchell of Stuart, Florida.’ for winning the “The Best in Show Concours d’Elegance Trophy” for their extremely Rare 1926 Hispano-Suiza H6B. Additional congratulations to James Bartel of Key West, Florida for winning  “The Best in Show Concours de Sport Trophy” for their exceptional 1974 Shadow DN4 Cam-Am Race Car.

Now in its third decade, the 26th Annual Amelia Island Concours d’Elegance is among the top automotive car show events in the country, if not the world. This past weekend, the Concours celebrated four consecutive days of car events while hosting over 300 classic, vintage, and exotic cars on the fairways of The Ritz-Carlton Golf Club Fairways in Amelia Island Florida. 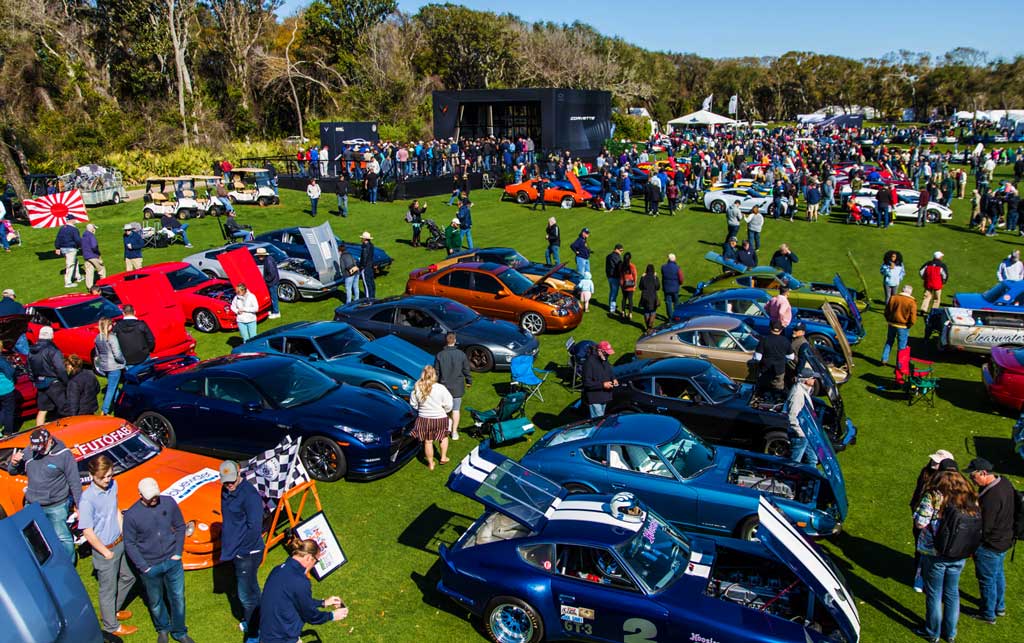 The 2021 Amelia Concours show entertained over 300 collectible cars and sold-out crowds at The Ritz-Carlton on the Golf Club Fairways in Amelia Island Florida.

Even on the heels of the COVID-19 pandemic, the show attained sold-out crowds with record-setting attendance and to top it off –  perfect breezy 80-degree weather. Bill Warner, the founder and chairman of the event joked by saying: “Last year we had to move up a week because of another event. But this year the event ran perfectly.  It proves that God loves car guys more than golfers.”

The event concluded on Sunday with the presentation of the “Best of Show Awards” for the two cars that were deemed to be the best of the best at the show. This year the awards went to a 1974 Shadow DN4 Cam-Am Race Car garnering the  “The Best in Show Concours de Sport Trophy” and an extremely rare 1926 Hispano-Suiza H6B that garnered the “The Best in Show Concours d’Elegance Trophy”.

The award-winning 1926 Hispano-Suiza H6B was first introduced in 1919 and is an extremely rare car. It was a pioneer of technological innovation offering an extremely high level of performance, handling, flexibility, innovation, and reliability. The car was a truly luxurious continental touring automobile and a direct competitor of the finest marques of it’s its time including the Isotta-Fraschini, Packard, Bentley, and Rolls-Royce. It was extremely high-priced so It was no coincidence that the King Alfonso of Spain was one of its first customers. The car was also a favorite of Edsel Ford who was known to tour around Grosse Point Farms on the grounds of Ford Motors Company. Today, 1926 Hispano-Suiza H6B is estimated to be worth well over $1,300,000 estimated by RM Sotheby’s. 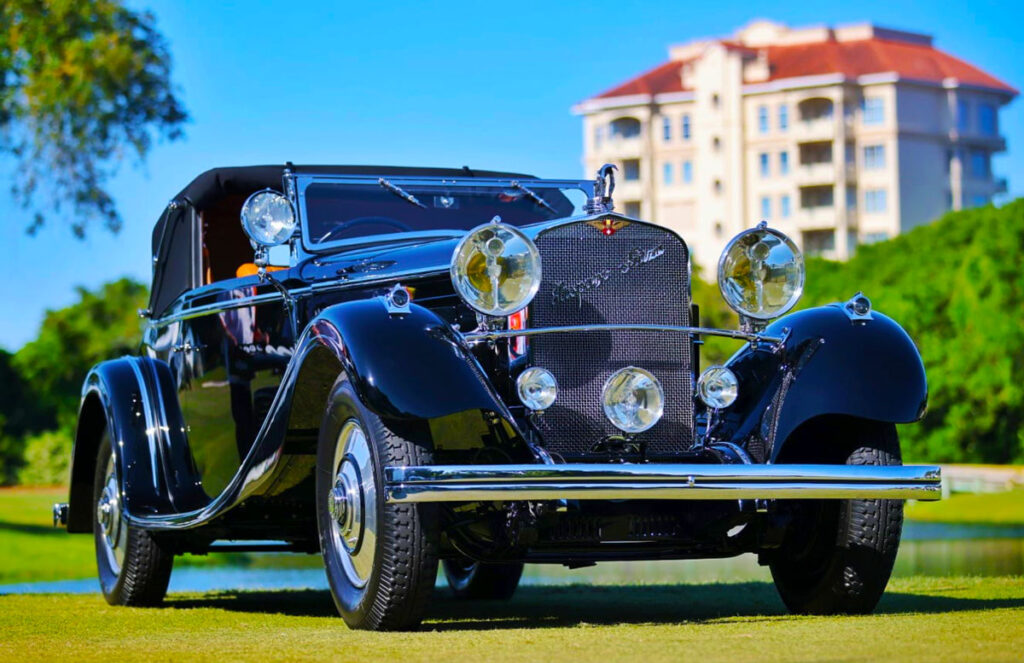 The Hispano-Suiza H6 was also an extremely fast car for 1926. It sported a powerful V-12 Aero 6,597-cc engine with overhead camshafts in combination with a three-speed gearbox and featured a pressure-lubricated crankshaft with seven main bearings and aluminum-alloy pistons.

A remarkable engine innovation was the steel-sleeved cylinders that screwed into the light-alloy block. The engine was capable of outputting 135 hp at 2,500 rpm and enough bundled flat torque to ensure the car could reach 85 mph in top gear alone.

Congratulations go out to Jill and Charles Mitchell of Stuart, Florida for winning the  Amelia Island “The Best in Show Concours d’Elegance Trophy” at the 2021 car show. 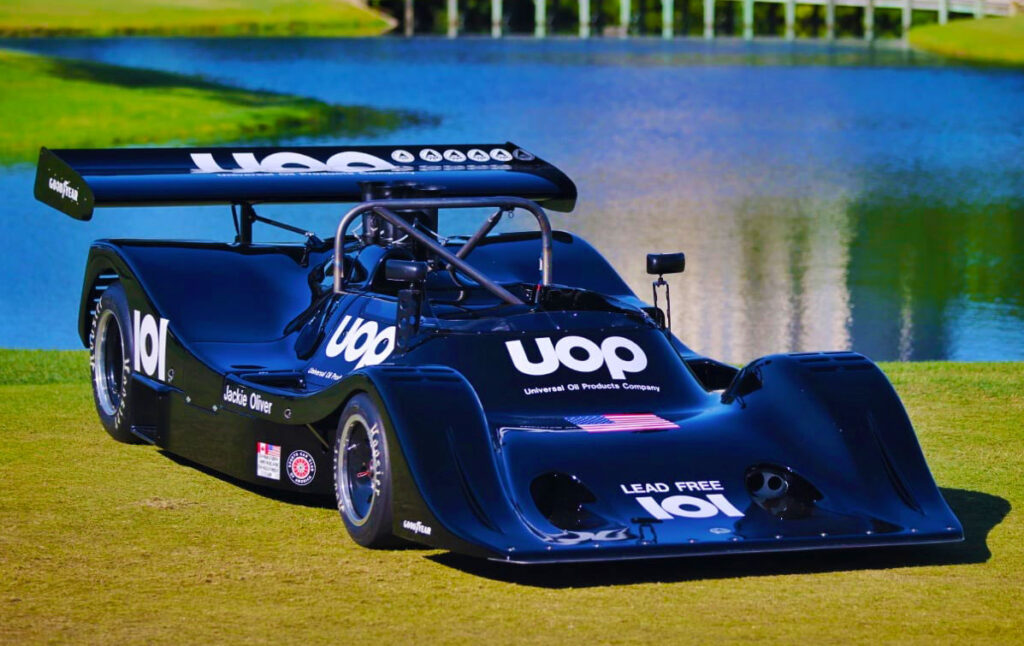 This 1974 Shadow DN4 Cam-Am Race Car Design has a tremendous racing history becoming one of the fastest Can-Am race cars to ever race the circuit. The 1974 Shadow DN4 became a Cam-Am champion a car with  Jackie Oliver driving in 1974. Additionally, It has won such races as the 1974 Mosport, 1974 Watkins Glen, 1974 Atlanta, and 1974 Mid-Ohio. The DN4 was so good in this category only George Follmer in another DN4 could challenge Oliver.

George said “There’s no substitute for horsepower, but chassis-wise the DN4 pointed in well and was very predictable. And because frontal area was so small, it was fast in a straight line. It was an extremely good race car”

The DN4 was built with typical Cam-Am engineering back in 1974 and include a Semi-monocoque chassis that was riveted together from aluminum was then covered with a thin fiberglass body. The Chevrolet all V8 aluminum engine produced anywhere from 735 to 800 bhp.

The car sports an all-aluminum V8 engine and a Hewland 4-Speed Manual transmission. It replaced the DN2 of 1973 and kept the same basic engineering. It was particularly suited to embrace the fuel restrictions that limited overall fuel consumption to 37 gallons. The race car is truly a technological wonder for its time and an all-time classic.

The next Concours d’Elegance is the Sandhills Motoring Festival & Car Show located in Pinehurst NC and scheduled for  May 28–30, 2021