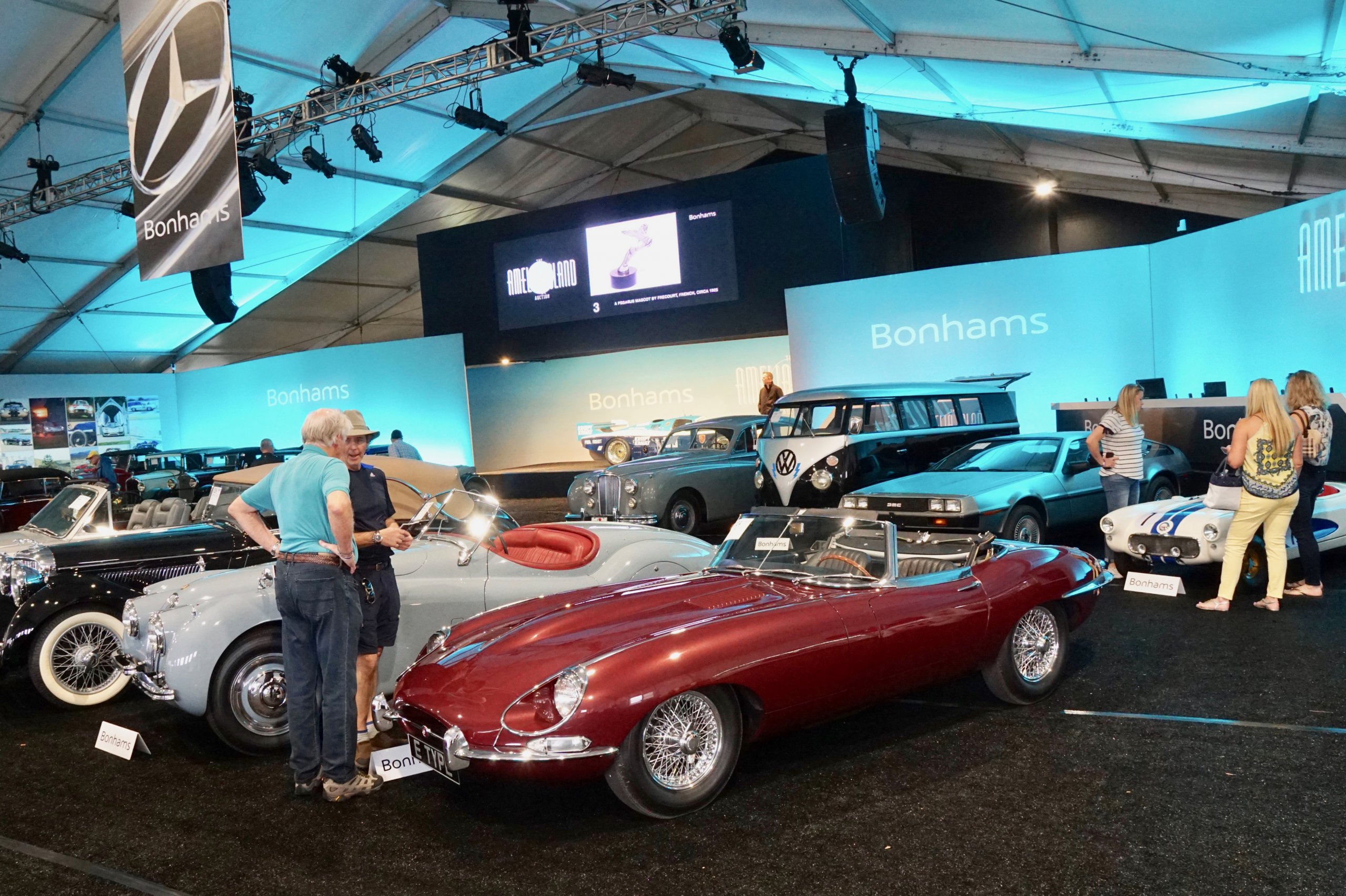 In record sale fashion, nearly 80-percent of cars that hit the auction block were sold at the Amelia Island Bonhams Auction this weekend generating over $21 million in sales. One record-setting historic vehicle, a 1932 Bugatti Type 55 Super Sport Roadster, sold for over $7,100,000.

The Seventh Annual Bonhams Auction was held at the Amelia Island Concours d’Elegance on May 20th at the Fernandina Beach Golf Club on Amelia Island Florida to bidders with an above-average appetite for buying some collectible historic vehicles.

While respecting social distancing and all local COVID-related guidelines, and with limited admission to the public, the auction had record participation while selling both in-person and online. Additionally, the action could be watched on the Bonhams App. 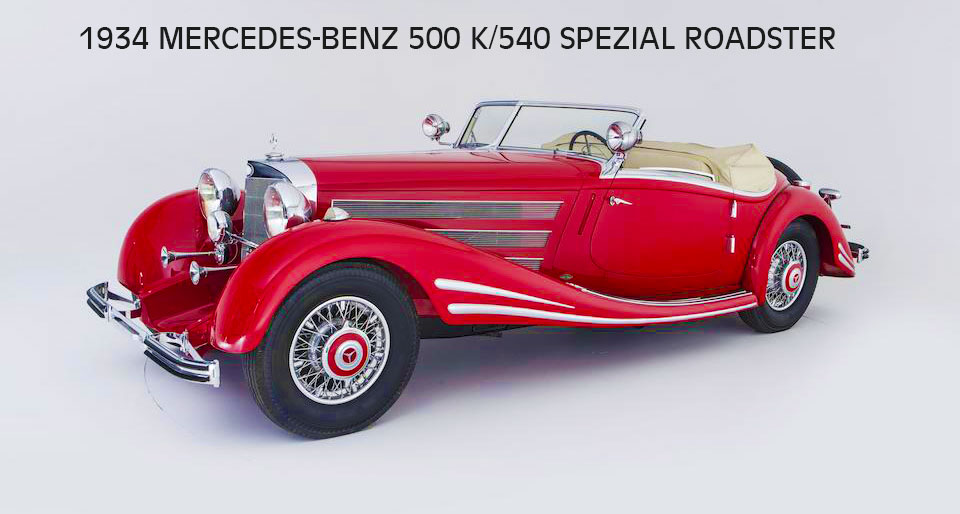 The highest auction price went to the 1934 Mercedes-Benz 500/540K Spezial Roadster which sold for just over $4.9 million.

The sensation of the 1934 Berlin Auto Show, Mercedes-Benz’s legendary 500K supercar was the creation of the gifted engineer and former racing driver Dr Hans Nibel. Designs upon which he had worked ranged from the 1909 200hp Blitzen Benz to the 1934 Mercedes-Benz W25, the first of the legendary ‘Silver Arrow’ racing cars, created after Dr Nibel had taken sole charge of engineering at the amalgamated Mercedes-Benz empire after the departure of Prof Dr Ferdinand Porsche at the end of 1928.

The manufacturing record of the 500 K reveals its exclusive nature: no more than 105 were produced in 1934, 190 in 1935 and 59 in 1936. In recent times the rarity, style and performance of these big supercharged Mercedes have made them – upon the few occasions they have come onto the open market – some of the most sought-after of all classic cars. They were the zenith of car manufacturing of their era, by the acknowledged finest-quality manufacturer of the day.

Although the 500 K/540 K chassis attracted the attention of many of the better quality bespoke coachbuilders of the day, Mercedes-Benz’s own Sindelfingen coachwork left little room for improvement and it can safely be argued that their own top of the range sports tourer, boldly and appropriately named the Spezial Roadster eclipsed all of its peers.

As with all of the finest automobiles of the 1930s and earlier, coachwork tended to be a collaboration between manufacturer and individual customer and even though Mercedes offered a specific coachwork designation there does seem to have been an element of personal tailoring involved. This car represents just one such example.  More information on this 1934 Mercedes 500.

It is important to note that this historic vehicle was sold without reserve to benefit the Cancer and Alzheimer’s Charities of Sweden.

Stefan Bergh, Secretary-General of the Swedish Cancer Society states, “This generous donation will help us get closer to achieving our vision of conquering cancer. The proceeds from the sale of this rare vehicle will benefit all those affected by cancer by contributing to the funding of important scientific research. The Swedish Cancer Society annually funds approximately 450 research projects”, Mr. Bergh continued. “To do this, we are entirely dependent on the generosity of private donors. We are very grateful for their support, as their gifts enable much of the ground-breaking work being done by Swedish scientists every day.”  Alzheimerfonden Sweden

The second-highest price car was a 1913 Mercer Type 35K Runabout that sold for $2.425 million. It was sold from the Clem and Mary Lange Car Collection.

The most famous Mercer offering on its T-head Type 35 chassis was the Raceabout, a race car-for-the-road that was essentially a pair of seats on a chassis, with a rakish lowered steering column. Such is the lasting fame of the Raceabout that enthusiasts tend to forget that Mercer offered an entire range of body styles on the same chassis and drivetrain. Some of these offered barely more bodywork and, therefore, virtually equal performance. 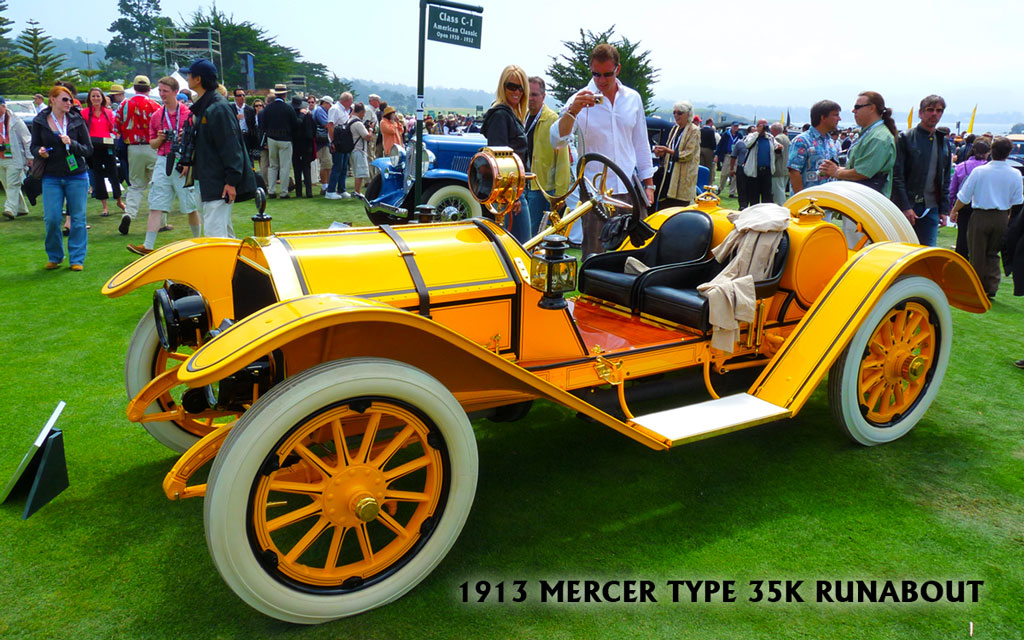 First and foremost among these is the Runabout, offered in 1913 and 1914, which could be essentially considered a Raceabout with side doors, a top, a full windshield, and a slightly raised steering column. The hood, radiator, and front fenders were all identical to those used on the Raceabout; the 1913 model even had the gearshift outside the body, in the Raceabout’s rakish fashion, and was on the same 108-in.-wheelbase chassis with desirable 4-speed transmission. In other words, the 1913 Runabout, in particular, really was “the luxury Raceabout.”

*This is the only surviving 1913 Type 35 Runabout know to exhist with external gearshift and 4-speed transmission.

Another record selling car was a 1933 Duesenberg Model J with ‘Sweep Panel’ Dual-Cowl Phaeton (Coachwork by LaGrande) sold for $1.655 million. 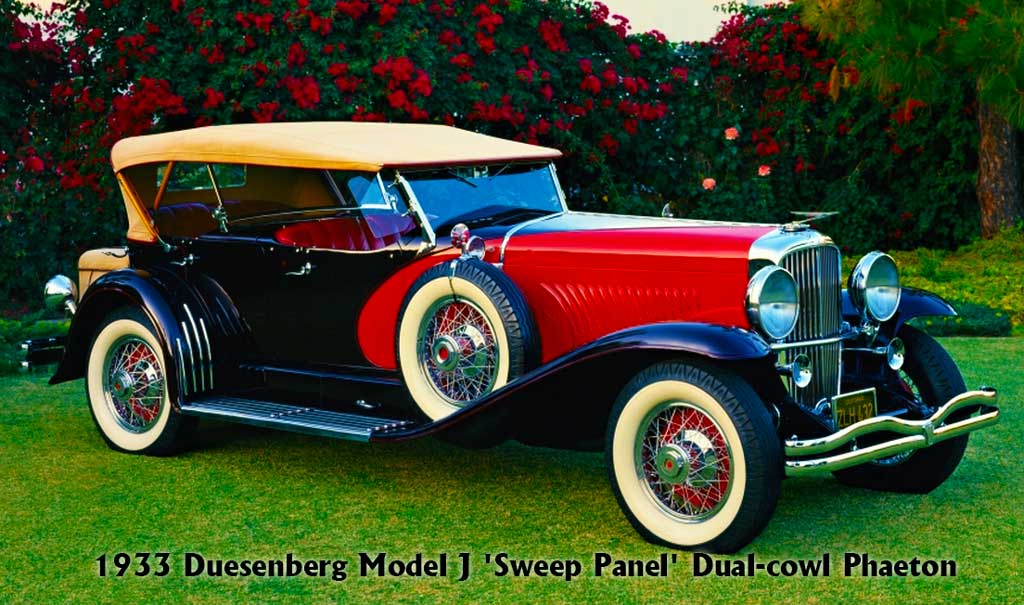 Among the first bodies made available for the Model J Duesenberg was a sporting Dual-Cowl Phaeton by LeBaron, which featured a contour line that began at the radiator shell and raced backward, descending until it met the middle of the front door, when it reverse-curved back into the cowl. This formed a so-called ‘sweep panel,’ which provided a perfect place to split one of the newly popular two-tone color schemes.

Much of the Type 57’s commercial success may be attributed to Jean Bugatti’s sensitive, flowing coachwork, which graced the most famous of the chassis’ examples.

After several years, Duesenberg president Harold Ames decided to bring the production of several of the more popular body styles under the Cord Corporation’s own direct auspices. Among them was the ‘Sweep Panel’ Dual-Cowl Phaeton, which was soon redrawn by the great Gordon Buehrig. Many feel that Buehrig improved the body’s lines, with a cowl that dramatically reverse-curved into a higher beltline that flowed evenly from cowl to tail, and a more subtle curve to the ‘sweep panel’ itself. A narrower rear transom allowed the top to fold nearly flush with the body when lowered. More detail on 1933 Duesenberg Model J 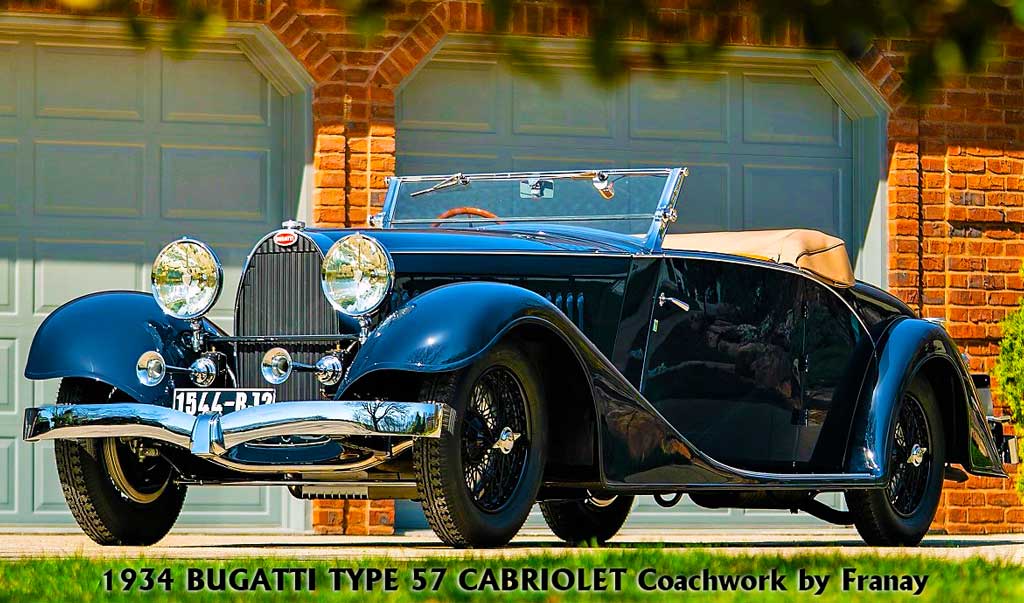 This is the only 1934 Bugatti Type-57 Cabriolet with Coachwork bodied by Franay and formerly in the collection of famed French filmmaker Jean Rouch.

The Type 57 Bugatti, introduced in 1934, marked Jean Bugatti’s emergence as Bugatti’s leader and creative force. It was the first new model built under his direction and it incorporated many features that were new to Bugatti. Its dual overhead camshaft eight-cylinder engine had dimensions of 72x100mm, offering 3,257cc displacement. The crankshaft ran in five main bearings. The camshafts were driven by a train of helical-tooth gears at the engine’s rear with a further crankshaft bearing behind them. Finger cam followers minimized side thrust on the valve stems.

This stunning Bugatti Cabriolet not only features one-off coachwork, but it is among the few Bugattis—and only Type 57—to have been clothed by the famed coachbuilder Franay. With well-known history virtually since new, few owners in the last half-century, and a recent Concours restoration, it is surely a special machine.

According to a report by Bugatti expert Pierre-Yves Laugier, 57127 was ordered new through Paris Bugatti distributor Dominique Lumberjack and delivered as a bare chassis on the fourth of July, 1934 with an invoice of 50,400 Francs billed to the purchaser. The savvy individual ordering this bare chassis for custom coachwork was none other than Hella Hartwich, a wealthy German movie star and ski champion who had recently starred in the 1932 film Slalom opposite Walter Riml. Dating the up-and-coming and soon-to-be multiple Oscar award winner Billy Wilder, the two had recently moved to Paris following Hitler’s rise to power in Germany in 1933. More detail on this car.

About the Clem and Mary Lange Car Collection.